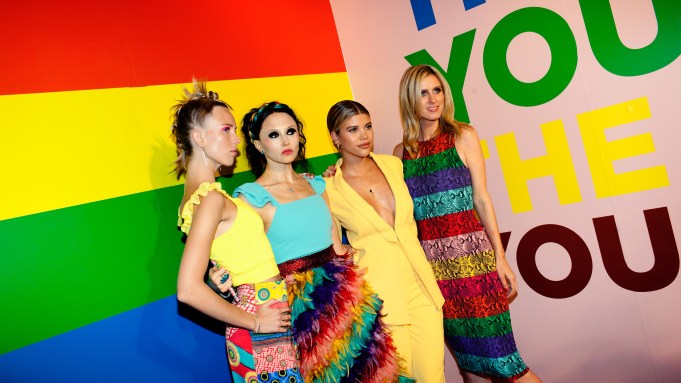 All the colors of the rainbow were represented on Tuesday night in New York, where Stacey Bendet threw an Alice + Olivia party for Pride Month.

Mia Moretti took advantage of the photo ops, grabbing Jackson by the hand to be in a photograph with Bendet, Nicky Hilton Rothschild, Richie and Huma Abedine.

“I love you guys!” Bendet screamed as the group hammed it up for the cameras. Richie, for one, stuck her tongue out and adjusted her yellow pantsuit. She then danced to Kids See Ghosts’ “Free” and walked outside through the back door for some air.

A handful of brands — Svedka Vodka and the mattress brand Allswell among them — supported the evening, with a portion of the proceeds going to the Trevor Project, a suicide hotline for LGBTQ youth. The party also marked the kick-off for Alice + Olivia’s 2019 Communi-T initiative backing the Trevor Project.

“People in the company decide as a collective whole which organizations we want to support each season,” Bendet explained. “Everyone unanimously thought that Pride and the Trevor Project was such a great initiative to [advocate for].”

To keep guests entertained, there was an adjacent room — completely covered in baby pink — with Hanky Panky underwear available for rainbow bedazzling. Kolb — who, much to Bendet’s mock-dismay, wore a white T-shirt — could be seen in the next room at the tie-dye station. Instead of passed canapés, attendees were offered slices of pizza in rainbow boxes, which quickly became props for photographs.

Jackson was joined by some of her “Pose” costars — a fleet of voguers including Dashaun Wesley and other choreographers from the show who performed throughout the night, hitting dips and layouts with ease.

The actress acknowledged that the show and its cast are experiencing a bout of popularity — and, by extension, visibility.

“In order for you to understand where people are coming from, you have to be taken back a bit to [see] their history,” Jackson said. “Now people are really seeing the history of the LGBTQIA+ community through ‘Pose.’

“When I was growing up, I wanted to be able to look on TV and see someone who represented me, who looked like me. That let me know it was OK to be myself. You have so many people now that are saying to themselves, ‘Oh look, maybe it’s OK for me to accept my child because now I can see it on TV. It lets me know it’s OK.’”

These New Asian Restaurants Are Taking Over Parisian Gastronomy