The boisterous bombshell hosted a dinner party with the jeweler in honor of the new Midnight Collection of timepieces. 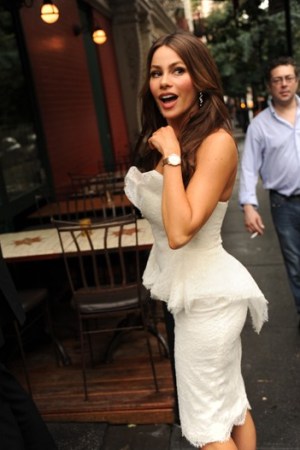 “Refined” and “elegance” may have been the oft-repeated catchphrases at the intimate Harry Winston dinner Wednesday night at Sant Ambroeus in Manhattan’s West Village in honor of the new Midnight Collection of timepieces, but the company was anything but restrained.

This story first appeared in the June 24, 2011 issue of WWD. Subscribe Today.

“This is The Midnight,” purred Sofia Vergara, who co-hosted the dinner with Harry Winston president and chief executive officer Frédéric de Narp, bringing her hand up to her chin in an exaggeration of old jewelry advertisements. “I love it. I’m going to wear it at midnight and midday. I mean, look at my wrist. It’s embarrassingly small. It’s like a chicken leg. Look at my arms. OK, I don’t want big arms and wrists, but they are so small I can never find a watch. I got this and I was like, ‘I am never taking it off.’”

Rachel Roy and Selita Ebanks slipped out of the rain and into the restaurant to sip Champagne before settling down for the four-course dinner at a candle-lined table with Zani Gugelmann and Shalom Harlow. Keren Craig and Georgina Chapman were on hand as well, which was lucky for Vergara, who explained in a stage whisper that it was her first time ever wearing Marchesa. Later, the actress grabbed Chapman.

“I’m sewn into this,” she explained of her white strapless dress.

“Good,” Chapman said with a grin.

Vergara explained that it wasn’t her first dalliance with Harry Winston.

“They gave me these incredible earrings for the Met ball, and the most amazing bracelet,” she said. “You wouldn’t know it, because it was all diamond-diamond-diamond-diamond, but you’d turn this little thing and it was a watch. And I’ll tell you one thing, I’ve never had so many compliments in my life from men.”

Surely, television’s favorite bombshell is on the receiving end of male compliments rather regularly?

“Okay, sure, yeah, but not from accessories,” Vergara laughed, as she mimed, with a Pepe le Pew flair, the act of ogling down someone else’s dress. “Men do this and they say, ‘Oh yeah, you look fantastic,’ but with this watch, everyone wanted to come see it. Guys from other tables came over to look. It was really weird. But it was a very unique piece.”