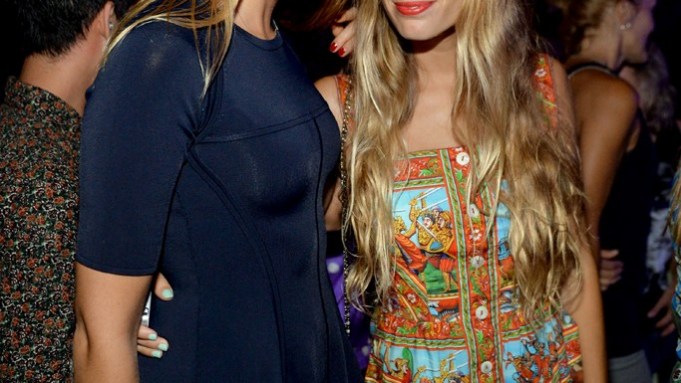 Two bikini-clad girls, three inflatable pool animals and four members of the British folk rock band Mumford & Sons: That was how the pool scene started — and then quickly progressed — on the roof deck and terrace of Manhattan’s Soho House Thursday night for the private club’s 10th anniversary party.

“The band keeps asking people to take their clothes off and get into the pool. You gotta respect that,” said Anthony Mackie, who arrived at the event with Paul Bettany and Jennifer Connelly; he and Connelly are starring in Bettany’s directorial debut in the upcoming indie flick, “Shelter.”

Mackie, who held court near the bar, wasn’t about to go swimming himself. “I came up here five days ago for a meeting, and there were about 18 kids in the pool,” he said. “And I was like, man, that is probably a yellow pool. No amount of chlorine can clean a pool after that.”

Mumford & Sons’ hour-long performance was not without a few surprises. First came a cover of Bruce Springsteen’s “I’m on Fire,” and later lead singer Marcus Mumford called upon the crowd for an impromptu karaoke session; the chosen female sung a throaty rendition of AC/DC’s “You Shook Me All Night Long.” The venue seemed to relax its strict no-photography policy as guests raised their iPhones to capture every moment. Jenna Lyons stood atop one of the poolside mattresses to watch the show.

Between songs, singer John Legend got on stage without any warning.

“John Legend, this random motherf–ker — we have no idea who he is — showed up and said ‘Let’s do a little duet.’ At least I think his name is John,” said Mumford, before launching into a performance of Marvin Gaye’s “I Heard It Through the Grapevine” with the singer.

“Now everything we do is gonna be s–t,” joked Mumford after the performance.