Alma Jodorowsky, Mahaut Mondino and Boyd Holbrook were among the guests. 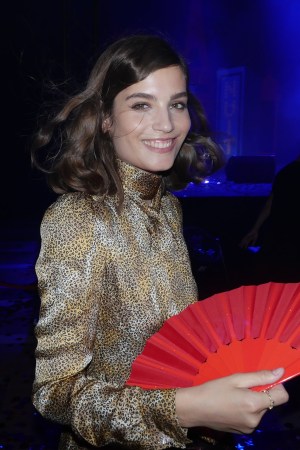 CAFÉ CULTURE: The École des Beaux-Arts in Paris’ exterior was alight with colored stripes and silhouettes of hearts, lips and eyes on Wednesday night in celebration of Sonia Rykiel’s collaboration with Lancôme.

The two brands have joined forces on a limited-edition makeup collection for fall, which gleaned inspiration from the Saint-Germain-des-Prés neighborhood where the fashion label was born and is headquartered, just a few blocks from the art school.

French actress Alma Jodorowsky — who is one of the two faces of the Sonia Rykiel x Lancôme campaign — was among the hundreds of attendees to stream through the Beaux-Art’s cobbled courtyard to enter the hallowed institution, where a faux frontage “Café de Fleurs,” was set up.

“I have a movie coming out next week, ‘Juillet Août,’ and another one in September, named ‘Kids in Love,’” she said.

Jodorowsky enthused about the capsule line.

“It’s makeup you can play with. I like the packaging, the colors,” she said.

“Sonia Rykiel is a house of color,” continued the label’s artistic director Julie de Libran, who said she gave Lisa Eldridge hues that inspire her, and the makeup creative director for Lancôme conceived the likes of an eye shadow in midnight blue.

De Libran said makeup is “like putting on a fun dress and going dancing. You can wear different dresses, different colors. And it’s wonderful to have that artifice as a woman or a man.”

Mahaut Mondino, the daughter of Jean-Baptiste Mondino, has just finished her first album, called “Pardon My French,” which will be out this fall.

“I recorded it in L.A.,” she said. “And I just released my first single, ‘Summertime.’”

It was a musical event all around. Throughout the evening, performers took to the massive stage, including Cerrone, Martha Wash, Barbara Tucker and Cécile Cassel (aka HollySiz), in what was dubbed the “Club Saint Germain” area.

The Beaux-Art’s central room had been morphed into a Parisian scene, with café tables, book-lined walls, bartenders serving drinks and helpings of scrumptious macaroons.