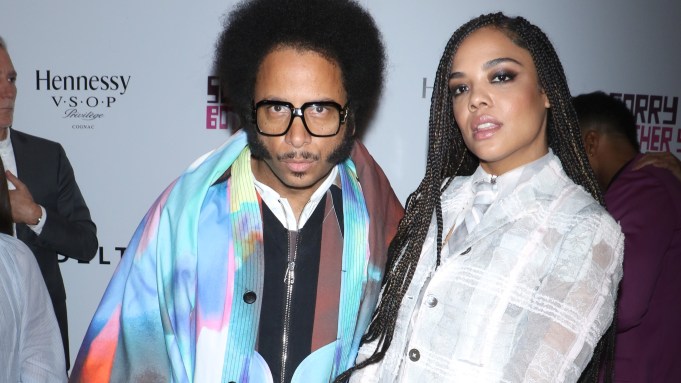 At Wednesday night’s premiere of “Sorry to Bother You,” the film’s commentary on social and economic inequalities felt especially weighty given the recent uproar against the Trump administration’s immigration policy.

“The movie has a lot to say about the value of the dollar being placed over the value of human life, the success of the group over the success of the individual and what’s going on in American economics,” said Armie Hammer, who plays Steve Lift, the cocaine-fueled chief executive officer behind WorryFree, a company that not-so-discreetly sells modern-day slavery.

“Sorry to Bother You,” which is the directorial debut from rapper Boots Riley, originally bowed at Sundance this year. The film came to Brooklyn on the opening night of the 10th annual BAM Cinema Fest, a showcase of American independent films, at the BAM Harvey Theater.

The plot centers around an African-American telemarketer named Cassius “Cash” Green, played by Lakeith Stanfield, who becomes successful once he starts using his “white voice” to make sale after sale. He then gets promoted to a “power caller,” where he works for Lift’s WorryFree selling lifetime labor contracts. Green is faced with the moral conundrum of working for a company that promotes forced labor even though he’s more financially successful than he’s ever been in his life, later taking action against the company once he finds out its dark secret.

“I think my film is ultimately optimistic,” Riley said on the red carpet. “It’s optimistic about how we can change the world and I think that relates a lot with today where people are very overwhelmed. Hopefully it’s a film that people will remember for decades and hopefully will have mass movements that change the world and make the film irrelevant.”

The premiere brought together the likes of Tessa Thompson, Chris Rock, Joshua Jackson, Ilana Glazer and Alia Shawkat, among others. As moviegoers filed into the theater, Thompson, who plays Detroit in the film, hung back to speak to press about its cultural significance.

“We’re living inside a time in terms of Hollywood where this myth that black and brown faces don’t sell overseas is being bashed by the success of a film like ‘Black Panther,’” she said. “I hope this film also creates a new idea in Hollywood, which is to say that black and brown people can exist in narratives like magical realism and they can tell all sorts of stories and talk about old ideas in new ways and people want to watch it and not just black people.”