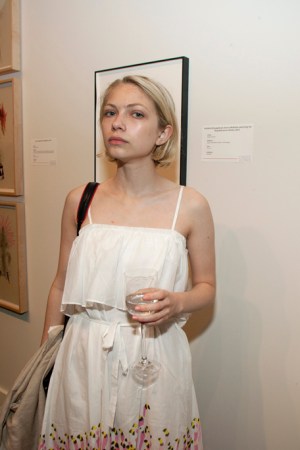 UPTOWN GIRL POWER: “These are really old, dear friends,” said Laurie Simmons, motioning over to her cohosts for the evening, Cindy Sherman and Marilyn Minter, at the Choice Works auction at Sotheby’s to benefit Planned Parenthood on Friday night. “And it’s great to unify here, because I can’t think of a better cause to attach my name to. My husband feels the same way, and my kids feel the same way. I can’t imagine a world without Planned Parenthood right now. And there is still so much to do.”

But Cecile Richards, president of Planned Parenthood Federation of America and Planned Parenthood Action Fund, had some uplifting news for the crowd. “After all this work, we are now seeing the lowest teen pregnancy rate in the United States in 40 years. It’s tough out there in the states, though — and I’m from Texas, so I know. We have our work cut out for us.”

Later, during the live auction (as well as a silent auction on Artsy), a piece by Sherman sold for $140,000; a painting by Minter for $150,000. “I’ve been supporting Planned Parenthood all my life,” Minter said. “I’ve even used it myself, back when I had no money. It’s where I got my birth control. During college, every one of us got support from them. I’m just devastated by what’s going on in the rest of the country. We thought this battle was won. And it’s not like women are not going to get abortions — they’re just gonna get unsafe ones and illegal ones. So we have to fight back.”