The Metropolitan Opera threw itself a birthday party of epic proportions at Lincoln Center on Sunday night to celebrate its 125th anniversary. 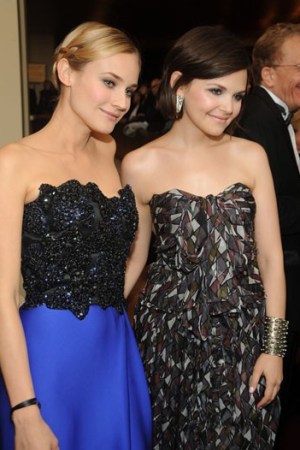 Despite facing a major budget crunch, the Metropolitan Opera threw itself a birthday party of epic proportions at Lincoln Center on Sunday night to celebrate its 125th anniversary. There were fireworks on stage, acrobatic “angels” who flew overhead, wizardlike animation that brought one of the famous Marc Chagall murals to life and plenty of celebrities, including Woody Allen, Claire Danes, Mary-Kate Olsen, Diane Kruger, Claudia Schiffer, Jeremy Irons, Patricia Clarkson and Emily Mortimer. But those who performed carried much more star power. Renée Fleming, Natalie Dessay, Joseph Calleja, Dmitri Hvorostovsky and Placido Domingo — celebrating the 40th anniversary of his Met debut — all got ovations from fans as they joined with other singing legends to perform excerpts from 25 operas.

“Everything I’ve seen tonight is amazing,” said Kanye West, who was making his own Met debut along with girlfriend Amber Rose. (The grandes dames who populate the Parterre level must have gotten quite a shock from Rose’s slit-up-to-there minidress.) “It’s good just to take a moment to soak it all in,” continued the rapper.

Becki Newton was also an opera newbie and taking in the scene. “It’s my first opera and my first harem pants,” she quipped. Nearby, the designer of her sequinned ensemble, Stefano Pilati, of the night’s sponsor Yves Saint Laurent, was equally enthusiastic about the prospect of seeing Domingo perform for the first time. “I don’t go to the opera much. This will be a memorable night,” he said.

And even though the event raised $6.3 million, the economy was still on everyone’s mind. At the gala dinner afterwards, held in a tent on the Lincoln Center grounds, opera general manager Peter Gelb said, “There have been rumors that we are selling the Chagalls. We are not.” (The opera did, however, use them as collateral to help raise cash.)

The meal itself was recession-chic, featuring an iceberg wedge, meatloaf and mac ’n’ cheese. “I planned the menu to save money,” said Mercedes Bass to the crowd. “So don’t complain.”

Conservation was also an issue in Los Angeles, where a Hollywood power pack turned out on Thursday night at Todd and Katie Traina’s house for a salon honoring the environmental outreach group EcoMom.

“One of the things that you are given as a celebrity is the ability to raise awareness, so it’s incumbent on you to try to do that,” said Ben Affleck.

“We’re trying to instill proactive habits in the next generation,” said Robin Wright Penn. “When recycling began, it was alien, and now composting is second nature. But sustainability also means helping people around the world.” Penn was referring to conflict metals — this generation’s equivalent of conflict diamonds — natural resources used by electronics companies that fuel warfare in Africa. There to learn more about it all were Nicole Richie, Maria Bello, Kerry Washington and Isla Fisher.

“Celebrity is as celebrity does,” said Diane Lane, who came at Penn’s behest. “It’s unacceptable to be passive.” Emile Hirsch put it more bluntly: “My philosophy on talking to reporters about this stuff is you don’t have to be that smart, you just have to have a big mouth.”