Speaking Out at Jeffrey Fashion Cares

In recent weeks, a backlash has been growing around a pair of so-called “religious freedom” laws in Indiana and Arkansas that critics describe as homophobic. The fashion industry joined in the dissent on Monday night. 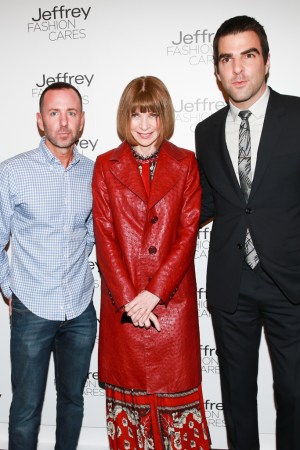 SPEAKING OUT: In recent weeks, a backlash has been growing around a pair of so-called “religious freedom” laws in Indiana and Arkansas that critics describe as homophobic. The fashion industry joined in the dissent on Monday night. At the annual Jeffrey Fashion Cares event and auction in New York, the actor Zachary Quinto criticized the laws and drew loud cheers from a crowd that included designers like Joseph Altuzarra, Prabal Gurung and Narciso Rodriguez. “We live in a time where our fellow citizens are crowd-sourcing money to monetize bigotry and hatred in the face of all the progress we’ve made,” the actor said. “And so it is our responsibility to stand up, to unify, and monetize our agenda, which is to be counted and to be respected.”

Over the last 12 years, the event, founded by Jeffrey Kalinsky, has become a tradition, known both as an earnest opportunity for the industry to raise money for a number of charitable organizations that focus on gay and lesbian causes and AIDS research — The Hetrick-Martin Institute, ACRIA and Lambda Legal — and also for the skimpy fashion show that follows the annual auction. A parade of shirtless male models like Brian Shimansky and Chad White again strutted down a runway sporting some of the more eye-catching wares sold at Kalinsky’s shops.

Before the eye candy, Quinto took his opportunity at the podium to get political. He urged the crowd to raise money for the cause, just like conservatives in Indiana have stood behind a pizza parlor that has drawn attention for refusing to serve gay couples.