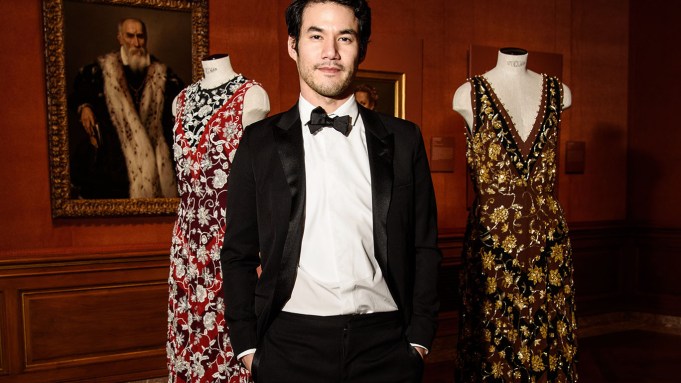 Now in its 20th year, the annual Young Fellows Ball at The Frick Collection has become the ultimate photo-op for springtime socials, with its hard-to-resist combination of museum-after-dark backdrop, festive gowns and the occasional masquerade mask. This year’s party, “Notte A Palazzo,” was sponsored by Altuzarra and took its theme from the current exhibition “Moroni: The Riches of Renaissance Portraiture.”

“I actually was really lucky to come and see the exhibition beforehand, and I think so much of what’s beautiful about Italian Renaissance painting is the idea of this expression of who you are through clothes,” Joseph Altuzarra said from one of the museum’s smaller side rooms, after posing for photos with Wes Gordon. “And I sort of feel like that’s what people are doing tonight.”

Prior to his sponsorship of the evening, the designer was relatively new to the museum and its collections.

“I have a close relationship with Paul Arnhold, who was the one who introduced me to this,” he said. “But it’s been really a joy getting to know the museum and the staff here have been incredible. It’s just been really wonderful.”

Guests including Gordon and Arnhold, Leandra Medine, Georgina Bloomberg, Elizabeth Kurpis, Pari Ehsan and more did their best to interpret the evening’s “cinquecento chic” dress code, with the help of an Altuzarra gown for many of them.

Inside the museum’s galleries, the photo ops were plentiful. Larry Milstein, wielding a feathered fan, gave art direction to a passing photographer. Another unsuspecting photographer was tasked with capturing “candids” of two women gazing at a portrait, giving the occasional glance over their shoulders. At one point a woman laid completely on the floor to better snap a desired angle of her comrade, not letting her form-fitting gown stop her — you have to admire the hustle.

Selections from Altuzarra’s fall 2017 collection, which was inspired by Renaissance portraiture, had been brought in for the evening to stand next to some of the pieces from the Moroni exhibition.

Inspiration was there to be found again Thursday night, should the designer, who said he “never” is on a break, be in the market.

“We start pre-spring before we even show fall. So it’s never-ending,” he said of his schedule. “You’re just on a full rat race all the time.”