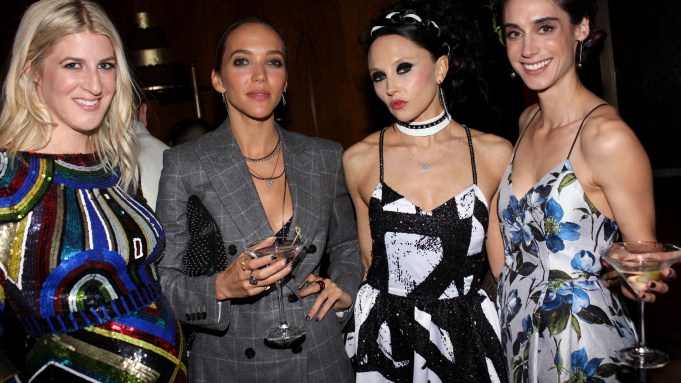 Guests filing into the Seagram Building Monday night were met firstly by some of Prince’s biggest hits: “I Wanna Be Your Lover” and “Raspberry Beret” thumped from enormous speakers inside the venue, where Art Production Fund’s annual gala was getting under way. This playlist was in keeping with the theme of the night, “Printz and the Revolution” — a cheeky take on the late musician’s band. Stacey Bendet, the creative director and chief executive officer of Alice + Olivia, and artist Adam Pendleton were the cause for such a pun; the Art Production Fund honored them for the evening. Bendet’s clothes have always boasted bright, loud colors, while Pendleton’s meticulous, black-and-white designs adorned napkins and centerpieces at the various dinner tables.

Bendet wore a dress decorated with black sequins and Pendleton’s designs from his series “Glory” superimposed onto it. (“I took a scan of his artwork and then we engineered it into the pattern of the dress,” she said.) Her handbag, a minaudière which she held up proudly for photos, was also inspired by a piece from the artist’s collection.

“Stacey had the idea before she came to my studio and I was interested in it, but I wanted to meet her in the studio so she could get a deeper sense of the work,” Pendleton explained. “And she really homed in on the visual essence of the work and translated it in an impactful way.”

Bendet, meanwhile, was in a tizzy. She detailed her “crazy” process dressing a large group of the women in attendance, including host Jenny Biggs and executive director of APF Casey Fremont.

“Oh my god, I dressed over 40 people tonight,” she said. “I’ve never had to dress [that many] people before.”

Pendleton said his history with APF stretches long into the Aughts: in 2007 on a series of artist-designed vote buttons. This time, he kept in touch with curators and founders Yvonne Force Villareal and Doreen Remen (whom he’s known since 2004), and Fremont reached out to him to participate in this project. He’s currently getting ready to open a show at Max Hetzler Gallery in Berlin — the works are sitting in his Brooklyn studio, and will be picked up and shipped to Germany for the show. That’s nice and easy.

Jason Biggs, who said he was “holding my wife’s purse while she takes pictures,” attended to support Jenny, emcee for the night. Mike Myers also came through, but was said to have declined photographs. Nicky Hilton Rothschild, Huma Abedin, Bettina Prentice and Shantell Martin exchanged hellos with friends; Will Cotton, dressed in a red checkered Thom Browne jacket, examined the art on offer.

Before a seated dinner and auction, attendees saw the next best thing to a live Prince performance: the Harlem Gospel Choir performed “I Would Die for You” and “Purple Rain,” their crisp harmonies and loud voices bouncing off the dining room walls.

Ardyn Opens in the West Village

Winston Duke Is One of ‘Us’