Zoe Saldana, Chris Pine, Idris Elba and Zachary Quinto were among the stars who turned up for the "Star Trek Beyond" premiere in San Diego. 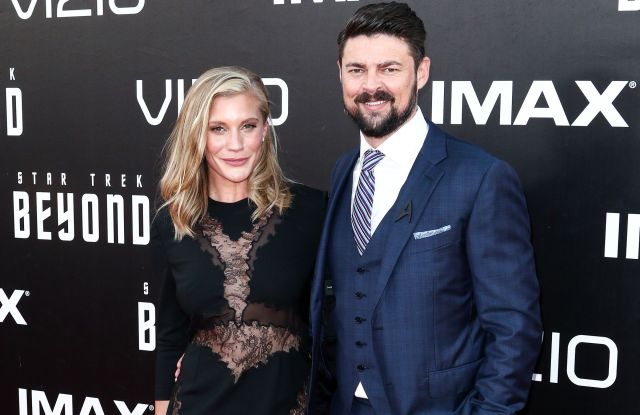 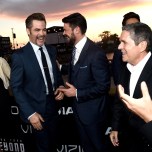 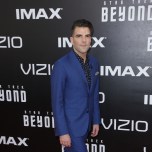 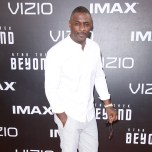 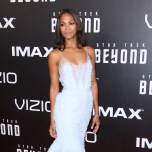 The stars did indeed align at Wednesday night’s premiere of “Star Trek Beyond,'”the third film in producer J.J. Abrams’ rebooted franchise — this time directed by “Fast & Furious” helmer Justin Lin. Zoe Saldana, Chris Pine and Zachary Quinto were back together for the third time, along with new cast members Idris Elba and Sofia Boutella, to walk an outdoor red carpet before debuting the film on the world’s first outdoor IMAX screen, erected in San Diego to kick off Comic-Con International.

While Saldana kept her usual fashion focus in a pastel paillette-covered Givenchy dress, the mostly male cast suited up in summery shades of blue. Elba showed up in a white sweater and shorts with trainers, looking no less chic, but certainly more like a local in the beachside town.

Like the rest of her castmates, Saldana sported a black Starfleet insignia pin on her pastel lavender Givenchy gown in Yelchin’s memory. “It’s a bittersweet moment for all of us, losing a cast member, losing an amazing bright star as Anton Yelchin,” she said. “I was very fortunate to know him as a person and to know how special he was, and how much he loved what he did.”

As Quinto joined his costars Karl Urban, John Cho and Simon Pegg, he said he was already looking ahead to the just-announced fourth adventure. “I think there’s a lot of territory to explore. The great thing about ‘Star Trek’ is there are limitless possibilities and combinations of story, and I think that this movie proves that in a lot of ways, and I can’t wait to see where all of us go to from here.”

For Pegg, who reprises his role as Scotty and served as one of the screenwriters, the takeaway was that occasionally, something that first gives you nightmares can wind up being your dream job. The cast’s foremost Trekspert, who has a geeky grasp of the franchise’s lexicon, admitted the original Sixties series, now celebrating its 50th anniversary, initially scared him as a child.

“I found that ‘The Corbomite Maneuver’ and the terrifying Balok was the figurehead of my childhood nightmares,” Pegg offered. It was a fanboy reference, naturally, but it was in the appropriate milieu. “But it was still something I had to watch,” Pegg added. “As I got older, I started to understand just how much weight it carried, allegorically. It’s meant different things to me over the years. And obviously now, it kind of means the world.”