The latest "Star Wars" installment drew hundreds of fans as well as the complete cast. 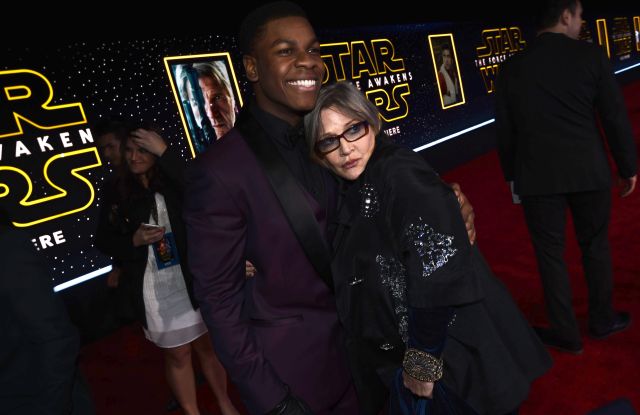 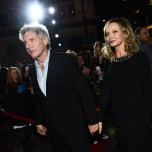 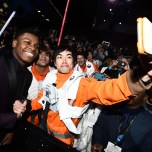 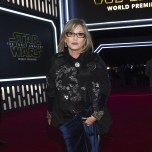 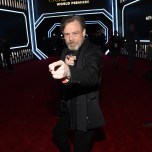 “These are new shoes!” proclaimed Harrison Ford as he walked the red carpet at the world premiere of J.J. Abrams’ highly anticipated film “Star Wars: The Force Awakens.” In this case, the actor wasn’t discussing fashion, but referencing how it felt to step back into Han Solo’s shoes — which he said he jumped at the chance to do. “I thought it was a great idea,” he said, then deadpanned, “because I needed a job.”

“It’s been a journey,” said Ridley, who wore a white custom Chloé dress that made her “feel like a princess.” The remark could easily be shrugged off as innocuous — or it could be a cryptic clue. Although a newcomer with few previous credits, Ridley worked the premiere’s carpet like a pro. “I was so nervous before I got here and now it’s really nice. It’s exciting to watch the film with an audience.” She said her first time watching the final cut was “very weird. Adam, Carrie and I watched it together.”

“I’m very, very lucky,” said Christie, who plays Captain Phasma in the film, though in this case she was discussing her custom Oscar de la Renta dress. “The reason I wanted to wear Oscar de la Renta this evening is that I think what Peter Copping is doing is truly brilliant. He’s honoring de la Renta’s classicism while bringing a modernity to it — and that’s really what I feel has been happening with this ‘Star Wars’ film.”

The actress, who also stars on “Game of Thrones,” said she’s been a fan of “Star Wars” since she was six years old. “It’s so overwhelming. How could anyone ever ever believe this sort of thing would happen?”

The cast posed for fan photos before entering a black tent filled with light sabers, storm troopers, a costumed C3-PO, and a remote-controlled R2D2 and BB-8. Gleeson told WWD he felt comfortable among the mayhem. “I had the experience slightly before in ‘Harry Potter,’” he said. “Being a smaller part of a bigger franchise, you’re protected because there are so many people ahead of you on the call sheet. They have to deal with the really hard questions. I’m like, ‘Why don’t you ask Harrison?’” Still, he was happy to talk shop. “I hope no one puts out any spoilers. I hope that everybody else who hasn’t seen it yet will watch it the way it’s intended….Hopefully you’ll be surprised and excited by it.”

The actor looked dapper in Burberry. “I wouldn’t say I’ve become a fashion guy because all I know is, I don’t feel like a jackass. I don’t feel uncomfortable and I feel like I look okay,” he said. “That’s as good as it gets for me.”