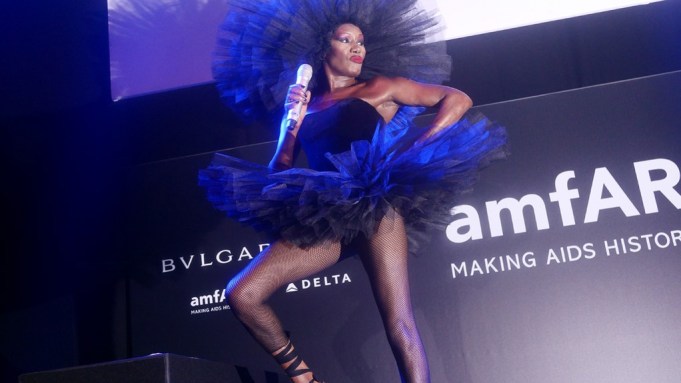 TALL ORDER: “Just for the record, Heidi is wearing six-inch heels and I’m not starring in ‘The Hobbit,’” Jeremy Piven said as he stepped onstage at amfAR’s Milan gala alongside Heidi Klum.

The German model, host of the event, pretended to take off her shoes and lowered herself behind the podium. “She’s actually 4-foot-11,” the “Entourage” star noted approvingly.

Madekwe was showing off her Savelli smartphone. “There’s one of these up for auction,” the “Revenge” star said. “This is all diamonds, this is gold — it’s kinda sick. It’s a Cinderella phone — it has to go back at midnight.”

As partner of the event, Bulgari loaned around 40 high-jewelry pieces and watches to guests. It also donated one of the auction lots: a gold watch worn by Matthew McConaughey at the Emmy Awards last month, which sold for 22,000 euros, or around $28,000 at current exchange.

Remo Ruffini, president and creative director of Moncler, was honored with amfAR’s Award of Courage for his commitment to the fight against AIDS. After dinner, Grace Jones performed for about 45 minutes, offering a fun Studio 54-inspired show, which included hula-hooping.

Professing herself “obsessed” with the singer, Dawson said she had chosen her oversize Vionnet gown with Jones in mind.

The actress is busy promoting “Sin City: A Dame to Kill For” and took advantage of her trip to hold meetings for Studio One Eighty Nine, her fledgling fashion brand and e-commerce site. Dawson said she had been collecting inspirational outfits for as long as she can remember.

“I’ve got a whole closet of stuff that doesn’t fit me, in colors that are not my right color, but there’s something about them that I had to buy,” she said. “It feels like I was preparing for this all of these years and I didn’t even realize it.”