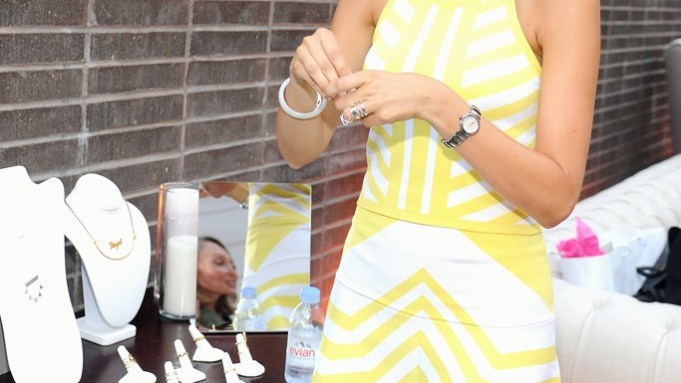 “The first word out of people’s mouths when they see Spring is ‘dangerous,’” said Ara Katz.

Really? What is this dangerous Spring you speak of? It is a new mobile shopping app and Katz is its cofounder. “One of the most important things we did when creating Spring was to solve checkout. With a swipe of your finger, you’re able to touch and pay,” she said. Well, that doesn’t sound so dangerous. Katz was at the showroom A-List in Beverly Hills on Tuesday to promote a new capsule collection on the app by the brand Parker, and drew a number of notable locals to shop the line in real time: Rashida Jones, Malin Akerman, Angela Lindvall, Jordana Brewster and Jenna Dewan-Tatum.

It made sense for Katz to hold a kind of Tupperware party for her app as it seems actresses here are not big fans of e-commerce, if they’re fans of the Internet at all.

“I am very behind with apps and technology. I don’t have an iPhone. My apps are really limited to photo apps,” said Camilla Belle. “I’ve always preferred going into a store to physically shop.”

Other actresses have graciously held each other’s hands before making the big jump to online shopping.

“I had not become an online shopper until I met Rachel Bilson. She changed my whole view on shopping,” said Jaime King of her costar on the TV program “Hart of Dixie.”

“Scandal” actress Katie Lowes was flipping through the racks when she offered some advice to the newbies.

“It’s dangerous territory,” she said. “You’ve got to make rules — like only [shop] during sober business hours.”