Edward Norton, Naomi Watts, Gong Li and Léa Seydoux were among the guests. 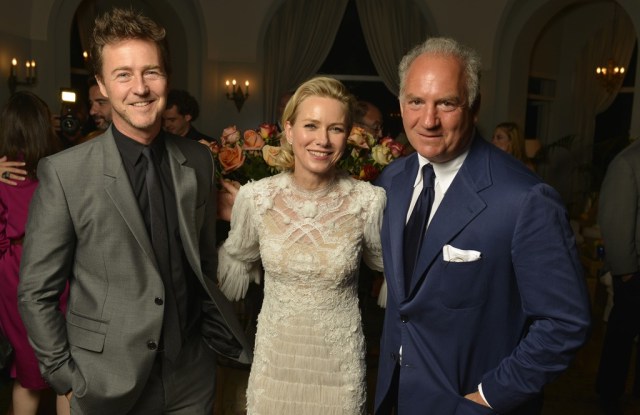 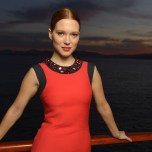 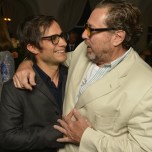 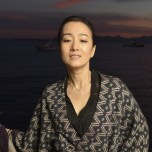 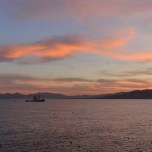 CAP D’ANTIBES, France — What do Doctor Who, Cinderella and the Incredible Hulk have in common? On Friday night, their screen avatars all broke bread at the Hôtel du Cap-Eden-Roc, where brand and talent agent Charles Finch hosted his annual Filmmakers Dinner, sponsored by Chivas Regal 25.

This story first appeared in the May 20, 2014 issue of WWD. Subscribe Today.

As the sun set over the Mediterranean, the cliff-top restaurant quickly turned into a hive of movie talk.

One year after sharing the Palme d’Or — the top prize at the Cannes Film Festival — with director Abdellatif Kechiche and costar Adèle Exarchopoulos for “Blue Is the Warmest Color,” Léa Seydoux was back in competition with “Saint Laurent,” in which she plays style icon Loulou de la Falaise.

“I’m very happy to be here,” the French actress said. “But it’s really a secondary role — the character is part of the puzzle of the movie.”

Fresh off his best director Oscar for “Gravity,” Cuáron is between projects. “I’m still trying to land,” he said with a smile. In the meantime, he’s been getting involved in politics, taking out full-page newspaper ads questioning the government of his native Mexico over its reform of the state-owned oil industry.

“I was very pleased that they answered, but the answers opened up new questions and I propose a debate,” Cuáron said.

Hampton is working on a screen adaptation of the classic novel “Ali and Nino” to be directed by Asif Kapadia. “It’s a great Azerbaijani novel set during the First World War – big movie – and we’re going to go shoot it out there at the end of the year,” he said, revealing that Adam Bakri is to star in the film.

Brühl said he would join a cast including Helen Mirren, Ryan Reynolds and Katie Holmes in “Woman in Gold,” directed by Simon Curtis and based on the book by Anne-Marie O’Connor about the battle for the restitution of Gustav Klimt’s “Portrait of Adele Bloch-Bauer,” stolen by the Nazis during World War Two.

“I’m being much more careful with the placement of this film than probably any other film that I’ve done because it’s such a tender subject in America, obviously, and you want to make sure that it goes down in the best possible way,” he said.

With this year marking the 20th anniversary of Kurt Cobain’s death, Broomfield also vowed to keep a low profile with his documentary “Kurt & Courtney.”

“That was a kind of life-shortening experience, doing that film, and I was very proud of it, but there were various times at which I thought, ‘Am I ever going to get through this film?’ So whenever I’m asked to comment further on it, I just feel I was lucky to get away with it the first time – I’m not going there again,” he said.

The cast of “The Expendables 3” plans to make the opposite of a low-key entrance at the festival. On Sunday, Sylvester Stallone, Arnold Schwarzenegger, Harrison Ford et al will roll down the Croisette in a pair of Soviet-made tanks, according to Zygi Kamasa, chief executive officer of distributor Lionsgate UK.

Vanity Fair’s Jonathan Becker said he would immortalize the action heroes for the magazine on the day of the stunt.