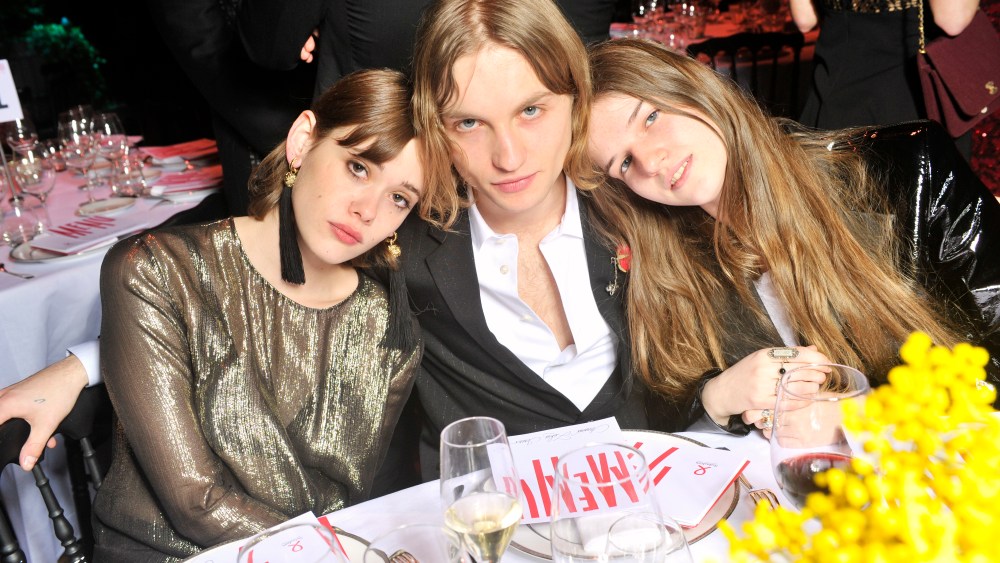 Paris Couture Week wrapped up with a chic send-off at the 15th annual Sidaction gala dinner on Thursday.

The event, which for years took place at the Bois de Boulogne’s Pavillon d’Armenonville, for the first time was held in the vast Salon d’Honneur in the Grand Palais, which is due to close for renovations.

Industry faces and front-row VIPs including Maria Grazia Chiuri, Isabelle Huppert, Catherine Deneuve and Lily-Rose Depp brushed elbows at a photo call and Champagne toast before taking their places for a three-course dinner.

“The fight against AIDS is a fight against discrimination in all its forms,” said Pierre Bergé, who presided over the dinner with singer Line Renaud. He said that the gala in total has raised more than 9 million euros, or $9.6 million at current exchange, since it was started in 2003. The funds are divided evenly between research and patient care.

Bergé also paid homage to the late Sonia Rykiel, who died last August and was a long-time supporter of Sidaction.

During the dinner, guests compared their raffle wins, with many slipping out for a sneaky cigarette between courses. “It’s like being back at school,” giggled actress Diane Kruger, who braved the arctic temperatures in a fluffy ostrich feather cocktail dress.

After back-to-back fashion weeks for men’s wear and couture, guests dished out tips for coping with fashion week fatigue.

“I recommend sleep, and nature,” said Julie de Libran, artistic director at Sonia Rykiel. “I like to head down to the Landes [a region on France’s Atlantic coast, south of Bordeaux ]. You can go out in the woods, and you get the sense that there’s just…air.”

“Avoid Champagne,” quipped Inès de la Fressange. “And I did hear that some famous journalists sleep with dark glasses, without mentioning any names.

“I’m always the first to arrive at a party. Like that, people see that you’ve turned up, you do your photos, and then slip out without saying goodbye. Nobody notices,” de la Fressange added. “Then it’s early to bed.”

The style icon has collaborated on a special line with luggage-maker Lipault Paris. “It’s navy, which apparently is amazing. People always ask me what the inspiration was. I’d love to say, ‘Rajasthan, Maharaja trips and Lawrence of Arabia,’ when really I just want something neat and perfect and impeccable that I can recognize, that doesn’t look like everything else that’s out there.”

“I’ve just had the most fantastic rest in Lanserhof in Germany,” suggested Kristin Scott Thomas, who visited the spa town in the Bavarian Alps after wrapping a film in which she plays Winston Churchill’s wife, Clementine.

“She was the most extraordinary woman — she helped him get through that war,” said the actress, who interviewed Churchill’s granddaughter while researching the role. “[Clementine] was patient and she was powerful. I’m so in love with her it’s ridiculous.”

Some guests already had their eye on their next projects. Lacoste’s Felipe Oliveira Baptista revealed the brand has hooked up with Yazbukey on a capsule of polos and T-shirts that will be presented in March. “It’s a really funny, funky twist on tennis.”

Vanessa Seward said she will be opening her fifth boutique, in London, next week, while Chanel ambassador Caroline de Maigret said she was working on adding interviews with musicians to her web site, CdM Diary, which she launched last fall in partnership with the luxury house.

“The film showed women as strong, with a female lead who makes choices we’re more used to seeing men make,” said Mischel. “Meanwhile I was playing the love interest, so there was a bit of a role reversal.”

Mischel said he was currently rehearsing for his second feature-length role in a film to be directed by Marc Fouchard, whose live-action short “The Way of Tea” was an Oscar finalist in 2014.