By Amanda Kaiser
with contributions from Tiffany Ap
on March 20, 2016
View Slideshow 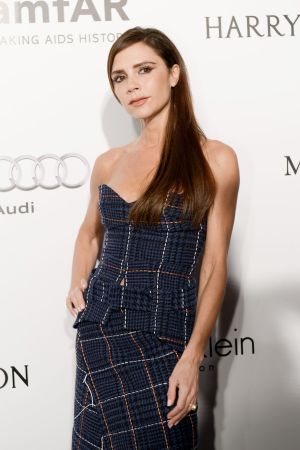 Uma Thurman, Adrien Brody, Karolina Kurkova, Michelle Rodriguez and a bevy of other celebrities filed into Shaw Studios on Saturday night for amfAR’s second annual fund-raising gala and auction in Hong Kong. The event, sponsored by Calvin Klein Collection and Harry Winston, raised $4 million for AIDS research and honored Victoria Beckham for her commitment to the cause.

The wall of journalists and TV crews awaiting celebrities seemed to impress Bruce Rockowitz. The chief executive officer of Global Brands was in attendance with his wife, pop singer Coco Lee, who introduced pianist Lang Lang’s performance at the gala.

“It looks like my wedding,” Rockowitz observed with a chuckle.

Thurman blew kisses to the cameras and opted out of press interviews before proceeding inside. As guests noshed on salmon and wagyu short ribs, she introduced Beckham as “a champion and leader” in the fight against AIDS before the designer picked up her award. Later on, Thurman assisted Simon de Pury with the art auction and provided a dash of comic relief at intervals. She playfully grabbed de Pury’s gavel at one point and offered up zingers about some of the items up for grabs, like a seven-night stay for 12 people at a luxury residence in the Maldives, where guests like Kate Winslet and Leonardo DiCaprio have stayed. “They change the sheets!” she quipped. Thurman also made use of her emceeing powers to wish Vogue China editor in chief Angelica Cheung’s daughter Hayley, in tow with her parents, a happy ninth birthday.

Brody, who is establishing himself as a professional artist as well as an actor, donated one of his own artworks to the auction: a painting of a gray dragon. “I used to draw dinosaurs when I was a child, so it’s a certain extension of my childlike vision and style,” he said, adding that it was a little nerve-wracking to see it auctioned off. “Hopefully it fares well amongst the Warhols and the heavy-hitters.”

The actor-turned-artist actually did fairly well as “Grey Dragon” fetched $100,000. In comparison, a piece from Tracy Emin – a wall hanging in yellow neon letters spelling out the phrase “I Fell in Love Here” – sold for $120,000. Meanwhile, eight black-and-white Andy Warhol photographs chronicling his first and only trip to China in 1982 went for $190,000.

Brody was eager to talk about his next film project: a noir thriller called “Manhattan Night.” He said Jackie Chan is executive producer on the project, which Brody’s own film company and a Chinese firm are cofunding. “I love that genre,” he said.

Rodriguez was more cryptic in terms of her next steps.

“I think I just reached that stage where I just gotta go do it and then when it’s done, I’ll talk about it,” she said. “Female empowerment’s my move till the day I die. That’s all I give a shit about. So most of my work is going to have something to do with that.”

Kurkova, for her part, seemed more focused on pursuits of the tourist variety rather than professional.

“Just walking around, kind of seeing people, seeing how they walk, how they talk, how they dress, it’s always fascinating when you travel to different cities,” she said.

Tina Leung, a Hong Kong stylist, was eager to talk up the significance of the amfAR event taking place in her hometown.

“I think the attention has been taken away lately toward China but Hong Kong is always here to stay, it’s always going to stay an international city,” she said.

Francisco Costa, the women’s creative director of Calvin Klein Collection, said he’s a fan of the city. “There’s so much action. I find Hong Kong is like New York in the 1980s, in a good way,” he said.

“I hope we do it every year in Hong Kong, quite frankly,” Frost said.

Cole noted that the event’s success is all the more striking given the local environment and cultural norms.

“These kinds of things, they’re not inherent in the culture, the Chinese culture. You don’t have these big, public fund-raisers,” he said. “This year, we’ve humbly come back with our hands out.”