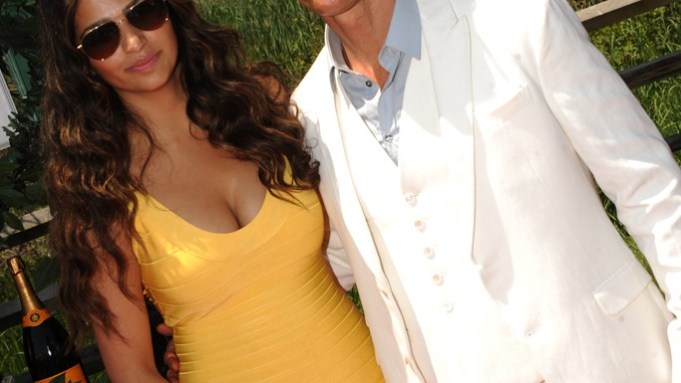 This year’s sixth annual Veuve Clicquot Polo Classic, which took place Saturday at Liberty State Park in New Jersey, unfolded flawlessly according to plan. Guests cooled off from the stifling afternoon inside a water taxi that took them from Battery Park City in Manhattan to the Jersey shore, followed by another equally chill trolley to the site of the match. A pixie-haired accordionist and a small string ensemble played soothing background music alongside the trail to the VIP white tents, lest the guests’ idyll be interrupted by a more natural soundtrack. Inside the tents, there was a seemingly endless supply of bubbly available. Guests wore their hippest summer finery — Dree Hemingway was poured into an Isabel Marant jumpsuit; Ashley Olsen, her hair in a ponytail, wore a red vintage caftan. Occasionally, VIPs shot concerned glances toward the match taking place just a few feet outside of the roped-off area, just to show they were paying attention. Other attendees included actress Rosario Dawson, models Anne V. and Alek Wek and designer Catherine Malandrino.

So it was with relief that the sedate proceedings were jolted by some Texas swagger. At the red carpet, nervous publicists awaited the late arrival of the marquee name of the afternoon, not Nacho Figueras, the star of the Black Watch Polo Team (who was on crutches after breaking his hip in a match last month), but Matthew McConaughey, who was taking some time off from filming a new cable series, “True Detective,” to promote his charity, the just keep livin Foundation. McConaughey pivoted from his usual romantic comedies a year ago to take roles, sometimes in supporting parts, in offbeat, less commercial films — “Bernie,” “Magic Mike,” “Killer Joe” and “Mud” — that have earned him critical accolades. Despite his well-earned respectability, McConaughey sauntered through the red carpet in full Wooderson mode, his old character in “Dazed & Confused,” with a grin plastered on his tanned mug that seemed to say, “All right, all right, all right, let’s take these reporters one by one.” McConaughey’s streak is likely to continue this year with “Dallas Buyers Club,” where he plays a Texas man diagnosed with AIDS. The part, due to his dramatic physical transformation, is likely to draw awards attention.

McConaughey’s wife, Camila Alves, wearing Hervé Léger, paid him the highest praises: “Five minutes into the movie I forgot I was watching my husband. I was like, who is this guy?”

She did her part for the film too, McConaughey said.

“She cooked, yeah, she cooked, it’d be the five ounces of whatever fish I was eating, a lot of vegetables. I had controlled meals. I didn’t make it so hard on myself where I didn’t go to a wonderful restaurant or steak house and bring my meal with me. I was pretty a much hermit and stayed home,” he said.

Asked if he was glad to be finally out of the strict regiment of preparing for the role, McConaughey let out another long “Yeahhh.”

“I like being out of it. But there was something fun about doing it, too. It was a real challenge. It was something that I got to really commit to and focus on for six months.” He said he’s up to speed on the most recent final cuts. “We got what we hoped we’d get. I’m very, very excited. Yeah, I’m proud of it.”