Stars From Hollywood, Fashion and Art Mingle at MOCA

The gala attracted everyone from street artists to burlesque dancers to a film dynasty progeny who made a burlesque-style video. 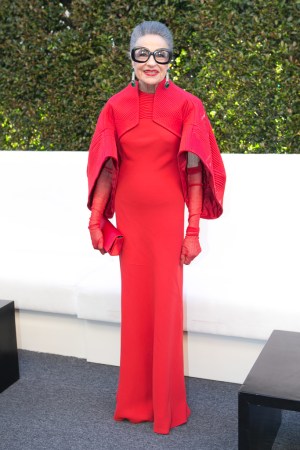 Attracting everyone from street artists to burlesque dancers to a film dynasty progeny who made a burlesque-style video at the gala, Los Angeles’ Museum of Contemporary Art and Louis Vuitton welcomed a coterie of creatives to the Geffen Contemporary at MOCA on Saturday night. No matter what their medium was, the thinkers and makers came to honor John Baldessari, the towering white-haired octogenarian who is known for being a gentle giant as much as a pioneer of genres such as telephone art, narrative art and post-structuralist art.

“John should be honored at every single party in L.A.,” said artist Catherine Opie, who’s known Baldessari for 30 years.

Other guests, including China Chow, Aaron Taylor-Johnson, Frank Gehry and Albert Brooks, seemed to be in overwhelming agreement. Actress Marisa Tomei could extend only her well-wishes to Baldessari, not her wallet. “I wish I could collect Baldessari,” she sighed.

Shepard Fairey, who arrived in the City of Angels after departing his hometown of Charleston, S.C., for stints at the Rhode Island School of Design and a San Diego skateboard company, said that what is considered low art is more accepted in his adopted hometown than in other cities. “New York is a playground of the rich now,” he said. “L.A. still has that diversity that makes for an exciting art scene.”

Not even winning an Oscar earlier this year for her supporting role in “Boyhood” — and continuing to receive congratulatory messages from other guests at the party — could get Patricia Arquette to toot her own horn as an artist. “I’m not really great at drawing, sketching and painting,” she confessed before her boyfriend, painter Eric White, interjected. “She’s a creative genius,” he said.

With the locus of the party being the capital of entertainment, art aficionados like Cecilia Dean naturally leaned toward the motion picture arts. Represented by CAA, the Visionaire cofounder is exploring projects in feature films and TV, whether it be a cable network or streaming service. For the fourth project in the production company she started with James Kaliardos, she interviewed Rodarte designers Kate and Laura Mulleavy and Ed Ruscha, among others, as they paid tribute to Baldessari in a film shown during the dinner. That’s not to say the proximity to artists translates to a sizable collection of her own. “They don’t give it to me, though,” she said.

Helping to raise over $3 million for MOCA, other guests looked beyond art for their collections. San Francisco-based philanthropist Joy Venturini Bianchi said she was “more of a fashion collector,” and Dita von Teese is compiling pin-up art created between the Thirties and Fifties. Then there’s von Teese’s own burlesque act. “But I think it’s a form of art,” she said.

As the featured post-dinner performer, Janelle Monae could stick only to her musical art, saving the live painting that she usually does onstage while singing for other gigs. “It flings everywhere,” she said of the paint.

In a black and white dress that matched Baldessari’s ground-breaking “I Will Not Make Any More Boring Art” piece projected on the walls of the giant white tent housing about 770 guests, Monae certainly appreciated Baldessari’s body of work, which includes some 377 solo exhibitions, 1,500 group shows and more than 4,000 pieces of art. “He does a lot of interactive art, which is great,” she said.

Just being able to call herself “an art appreciator” was enough for Britt Robertson, who’s fresh out of a world press tour to promote “Tomorrowland” with George Clooney and is now shooting “Cook,” a film about an unconventional family that also features Eddie Murphy. Rather than brushing up on Sam Taylor-Johnson, Mark Bradford, Doug Aitken, Sam Walls, Kimberly Brooks and other artists who came to the party, “I spent most of the day in the sun,” Robertson said.

Gia Coppola didn’t let an opportunity to initiate a film project escape her. While Rosanna Arquette proved how boogie-worthy her navy gown was during one of Monae’s opening songs, Coppola used her phone to film Nathalie Love undoing her striped Louis Vuitton minidress. Noticing curious looks from their tablemates, Love explained sheepishly: “Just making a video of me unsnapping my dress.”