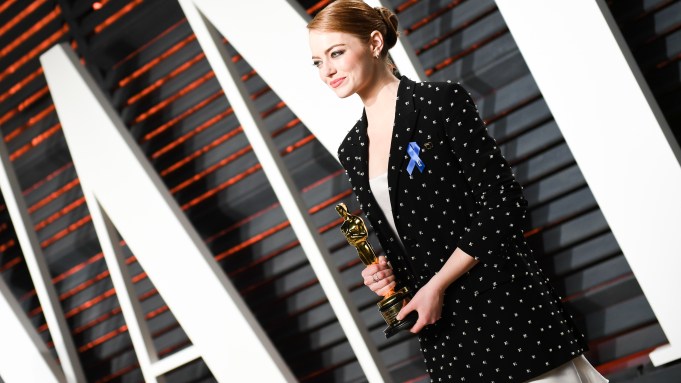 For a few hours each night, once a year, Vanity Fair’s Oscar party is the place to be.

No matter if you’re a tech tycoon, a model or a music mogul, you’re in good company — namely, that of Hollywood’s A-list. And it goes without saying, if you’re holding a golden statuette, you’re good to go. Emma Stone, Casey Affleck, Mahershala Ali and Viola Davis were there, natch.

The Graydon Carter-hosted fete, held in a custom-built structure in the middle of Beverly Hills, allows guests a few hundred yards of quiet time as they alight from their cars and make their way through a dim, tented, fabric-draped hallway lined with framed celebrity portraits.

Michelle Williams and BFF Busy Philipps took the opportunity to take a cute hand-holding photo in front of one. “We are so Instagram-ing that,” said Philipps. Once they arrived at the blinding step and repeat, Williams told a staffer, “We don’t want to do that. Can we go around the back?” When informed that there was no other way inside, Williams girded up for another photo and asked her friend, “Do I have anything in my teeth?”

At a quarter-to-midnight, the party was teeming with the likes of Charlize Theron, Elizabeth Banks, Angela Lindvall, Diane Kruger, Pharrell Williams, Justin Timberlake and Jessica Biel.

Ginnifer Goodwin and Josh Dallas, parents to two young children, looked around in delight and also a bit of apprehension. “We are like a ticking time bomb right now,” said Goodwin. “We have to get up in a few hours,” said Dallas.

It was a taste of things to come for several expectant stars at the party. Rosie Huntington-Whiteley rubbed her belly while chatting with Karlie Kloss, and Ciara greeted Janelle Monáe with “Congratulations!” for “Moonlight’s” Best Picture win. “I’m just soaking it all in, just enjoying every moment,” said Monáe.

So was Lucas Hedges. “I can barely talk anymore but I’m having a great time,” he said.

As the clock struck 12, the party went up a notch as Nicola and Will Peltz, Anwar Hadid, Jared Leto and Naomie Harris walked in.

Harris had changed into another white Calvin Klein by Appointment number, and Halle Berry also opted for another Versace.

“I mean, who are you if you don’t have a second dress? Come on,” deadpanned a server holding a tray of Champagne flutes at the entrance.

Not everyone was so spoiled for choice. Outside by the In-N-Out Burgers bar, Olivia Munn looked stunning in a red Giambattista Valli Couture high-necked gown that happened to be similar to Ruth Negga’s custom Valentino.

“I hope I’m not ruining anyone’s moment since hers was made just for her,” said Munn. “But it’s really hard to get a dress just a few days before the Oscars. I loved this one, and I obviously didn’t know what other people would be wearing.”

Back inside, in the dinner-tent-turned-dance-club, Amy Adams and husband Darren Le Gallo grooved to Snoop Dogg’s “California Love” with Alicia Vikander and other friends.

Others were prepping to head to Guy Oseary and Madonna’s post-party. “We might try and nap on the way there,” said Kyle MacLachlan. “As an actor, I’ve gotten really good at power naps.”

Outside, Tracee Ellis Ross was on her cell phone trying to explain to her driver where to pick her up, while Kirsten Dunst and Jesse Plemons were escorted to the limo pick-up area. But some celebs elected to drive themselves.

“Hi, can we get a status update on this?” Adrien Brody said, handing his valet stub over as his girlfriend perched on the edge of a concrete planter. “Oh never mind, I see my car,” he said, and with that headed off into the night, while more stars stayed until close to 4 a.m.