Stars Party Before the Party at the Spring Fling

Nur Kahn and Harry Josh’s annual Spring Fling on Saturday night worked as a warm up of sorts to the Costume Institute Gala.

By Alessandra Codinha on May 2, 2011
View Slideshow 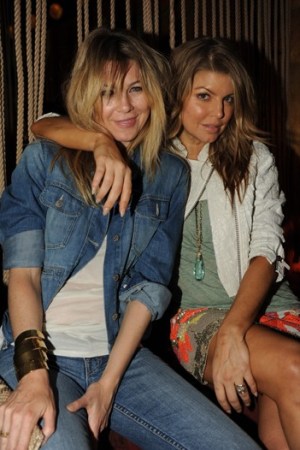 “What’s the Met Gala?” Mickey Rourke shouted over the din at Harry Josh and Nur Khan’s 10th annual Spring Fling at New York’s Hiro Ballroom on Saturday night. “What are you talking about?! The museum?”

The actor swung his arm out to encircle Rosie Huntington-Whitely, accidentally toppling a glass in the process. The spill splashed several nearby model-esque females in shredded denim/leather combinations. They were not visibly bothered.

“Oh,” Rourke continued, dipping his model/actress friend backwards over a nearby railing. “YOU, Rosie, are going to look f-cking amazing on Monday night.”

Huntington-Whitely giggled appreciatively before (in true action-hero form) her boyfriend, Jason Statham, stepped in. The trio group-hugged in a clot amidst the partygoers who shimmied and shoved past each other around the bar, angling for serving staff’s attention.

“This is sort of the ‘anti-Met gala,’” one explained. “So don’t be surprised if not everyone here is going on Monday.”

Still, it would be safe to assume several in the very shiny, happy crowd assembled at Hiro Ballroom on Saturday would be donning their glad-rags and heading up to the Metropolitan Museum for the Costume Institute Gala on Monday night. Ashley Olsen slunk into a booth in the VIP section, greeting Andy Valmorbida and Vladimir Restoin Roitfeld en route. Leonardo DiCaprio and Jessica Biel chatted in another booth, DiCaprio stopping mid-conversation to greet Jean Pigozzi. Lee Pace celebrated his recent addition to the cast of “The Hobbit” with a small group of friends. Fergie stood up on a banquette to dance when the DJ played the Black Eyed Peas, singing along to her own vocals. Tom Brady and Gisele Bundchen danced circles around Helena Christensen, Angela Lindvall, Alexander Wang, Behati Prinsloo and Linda Vojtova.

“Are those your dancing shoes?” Christensen teased Prinsloo, quoting the invitation’s dress code.

A late-arriving Eva Mendes and Will Smith aimed to avoid being snapped by photographers by slipping into Jay Z’s booth—heavily guarded by the rap star’s personal security.

“No pictures!” one suited guard shouted at a camera-wielding reveler. The photographer, as it turns out, had been less interested in the rap impresario’s image and more his own. He had been trying to snap a photo of himself with Christian Siriano in the two-thumbs-up style of Terry Richardson, who was dancing with Eniko Mihalik nearby.