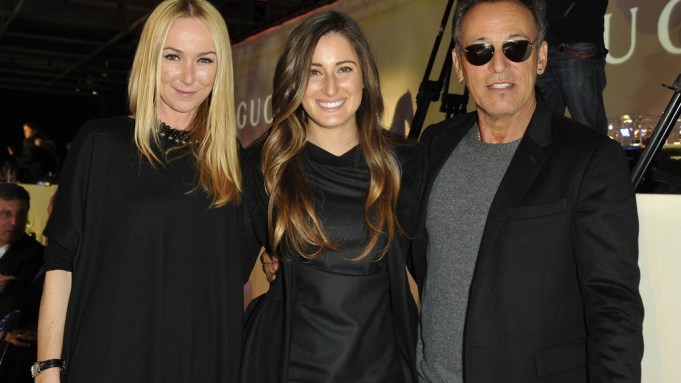 HORSING AROUND: It was family time on Sunday at the Gucci Paris Masters show-jumping event. Bruce Springsteen, his wife, Patti, and their daughter, Jessica, as well as Melinda Gates and her daughter, Jennifer, turned out at the event. They joined a glamorous family of French cinema — Marion Cotillard, Guillaume Canet and their toddler, Marcel — to attend a VIP luncheon hosted by the Italian fashion brand.

The prior day, Jessica Springsteen took part in the Style and Competition event, which raises money for Princess Caroline’s charitable organization, Association Mondiale de Amis de l’Enfance. Going for a “Black Swan” theme with model Edie Campbell, the two riders portrayed ballet dancers. “I was the white one,” said Springsteen, whose horse was named Wotsamillion.

“I am already working on a ‘Wotsamillion’ song,” her music legend dad grinned.

Canet, who had been a top-level junior rider, also participated in the Style and Competition event. Going for a “Grease” theme, he dressed up as John Travolta and arrived in a yellow Cadillac cabriolet. He traded the costume for a chic black suit on Sunday. The actor, who took part in several of Masters’ courses, said he intends to ease up on shooting next year to focus on riding and writing his next film, “a nutty comedy.”

Cotillard confessed she is not a rider. “I just pet horses,” she said. Sporting an Erdem dress, with her two-year-old on her lap, she said he has been in the saddle since he is one. “He is obsessed with horses,” she said, pointing at the horse toys he had strewn on the table.

Cotillard will appear next in an adaptation of “Macbeth” opposite Michael Fassbender. “The shooting starts next month in Scotland and London. It is the first time I play Lady Macbeth. I played it in drama school, but it is first time in Shakespeare’s text,” she explained.

Meanwhile, French actress Emmanuelle Béart, sporting a Fifties look with a Gucci gray dress, stars in “The Yellow Eyes of Crocodiles.” “I play the mean sister,” she said. The film is scheduled for an April release in France.