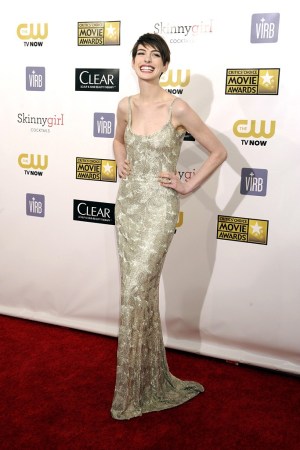 Following Thursday morning’s Oscar nominations announcement, this season’s candidates stepped out at the Critics’ Choice Movie Awards, where they practiced their speeches on- and offstage at Barker Hanger in Santa Monica.

“I’ve never done this,” said winner Jessica Chastain, as she posed with her best actress hardware. She confided backstage that she was nervous about navigating the stairway. “I asked Octavia Spencer, ‘In the odd chance that my name is called, how do you not fall on the stairs?’ She held my hand and said, ‘It’s alright if you win. You won’t embarrass yourself.’”

Awards season “It” girl Chastain, who had two Broadway performances of “The Heiress” on Wednesday, said the previous 24 hours had been a whirlwind.

“I finished my last show and about five hours later, I went to the airport. I found out on the plane about the Oscar nomination. I had a little bit of time to talk to people about how excited I was, then I went straight into hair and makeup. It’s like being on a conveyer belt right now. People will just go, ‘Here,’ and guide me in different directions.”

“Argo” took the best picture award while Ben Affleck — whom the Academy of Motion Picture Arts and Sciences passed over for an Oscar nod — walked away with best director. Costar Clea DuVall said it was bittersweet.

“The fact that they responded so highly to this movie says a lot about the films Ben made,” she said. “I’m very upset that he got snubbed. It’s ridiculous.”

“It seems unfair but that’s the way these things work,” she said. “Some people get left off and it’s hard to think of a reason why that happened other than it’s just an incredible year for films.”