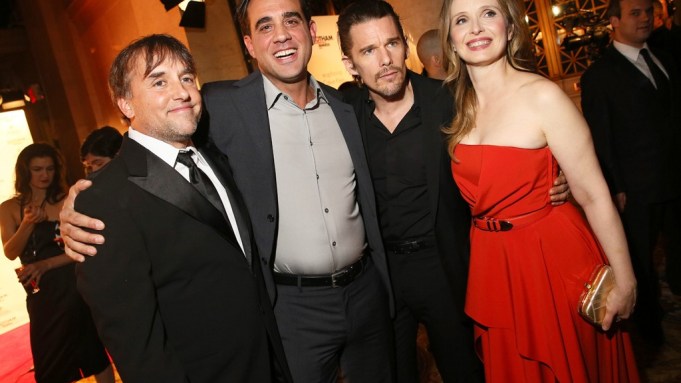 Sure, the grand ballroom at Cipriani Wall Street in Manhattan on Monday night was star-studded, but the vibe at the Gotham Independent Film Awards was pure indie. The prizes, now in their 23rd year, hold the distinction of being the first serious bling awards contenders pick up on their way to the big leagues, like the Golden Globes and the Academy Awards.

At this point in the race, Matthew McConaughey seems like a lock for an Oscar nomination for “Dallas Buyers Club,” and he was honored with Gotham’s Best Actor award. Jared Leto, his costar in a film that looks at the early years of the AIDS crisis, accepted the award on behalf of the actor, who couldn’t attend the ceremony. Leto took the stage with an iPhone to his ear.

“We have Mr. McConaughey on the phone right now,” Leto said, before a failed attempt at putting the actor on speakerphone.

Julie Delpy, an awards contender for her part in “Before Midnight,” paid tribute to Richard Linklater, the filmmaker behind the trilogy that stars the actress and Ethan Hawke, which includes “Before Sunrise” and “Before Sunset.”

“Richard, I think you got the best of me,” she said. “I could die right now. I could actually annihilate myself on stage, not that anyone would know because no one’s listening. But I want to thank you from the bottom of my big, fat, French heart.”

Many of the players making the rounds on the awards circuit were in attendance.

Oscar Isaac, whose “Inside Llewyn Davis” won Best Feature, and Rashida Jones, John Goodman and Darren Aronofsky took turns presenting. Also in the crowd were Michael B. Jordan, who won the award for Breakthrough Actor for “Fruitvale Station,” Mayor Michael Bloomberg, Forest Whitaker, Amy Poehler, Morgan Spurlock, Lupita Nyong’o and Shailene Woodley. There was one emotional moment amid all the self-promotion: Steve Buscemi teared up during a tribute to the late James Gandolfini.

With the holiday season approaching, actors at the Euphoria Calvin Klein-sponsored event dished on their upcoming plans.

Brie Larson, whose performance in “Short Term 12” beat the seemingly unbeatable Cate Blanchett for the Best Actress prize, asked for a “sleep suit” for Christmas. “It’s a sleeping bag, and a one-piece suit [you can wear],” she explained. “They can [withstand] as little as 35 degrees Fahrenheit. I mean, that’s pretty good.”

Kathryn Hahn, who was nominated for her role in “Afternoon Delight,” is heading to Tulum, Mexico, with her husband and children.

“This is what I want for Christmas: a tequila flight and a bowl of chips,” she said.