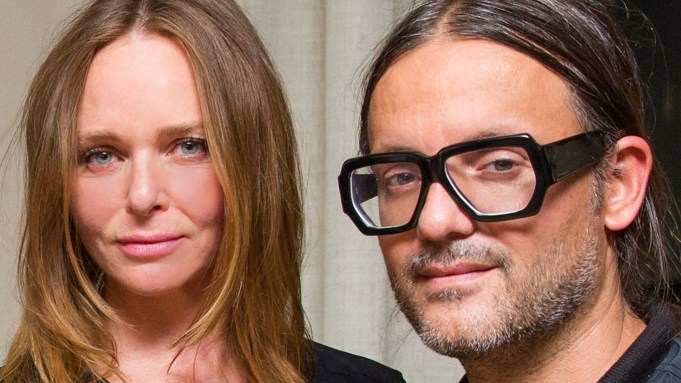 In a world of waste, consumerism and reality television stars selling weight-loss tea on Instagram, sometimes it’s nice to sit down in a comfortable room and escape. That might entail being swept away by stories of outer space and the ocean deep, or perhaps getting the opportunity to hear a tale about heroes in hot pursuit, chasing pirates in the sea for months before finally capturing them.

Does the whole scene sound too whimsical to be a reality? It’s not. That’s just what Stella McCartney and Parley for the Oceans provided on Tuesday night at the Greenwich Hotel in Manhattan, during a fete for their collaboration. McCartney and Parley, an organization that works to raise awareness for ocean pollution and climate change, assembled a panel of speakers who told those stories: marine biologist Dr. Sylvia Earle, space physicist Scott Bolton and marine conservation activist Captain Paul Watson — who described in harrowing detail the narrative about the pirates before a room of about 25 attendees including Anja Rubik, David Mayer de Rothschild and Diego Luna. The event was a distinct deviation from the usual brouhaha conjured by most fashion affairs. It was held in the hotel’s quiet penthouse, which bears the resemblance of a more luxurious version of a friend’s living room. Each speaker brought to the event a passion for nature and preservation of the earth — and McCartney was one of the most frank when it came to fashion’s impact on the environment.

“The fashion industry needs to catch up,” she said. “To an extent, I don’t think the actual industry of fashion has a deeper understanding of how we can be more contemporary and more modern in our resourcing and manufacturing while having a conscience when it comes to consumption. People in the fashion industry should come to understand the same thing that people in other industries have understood — that you can actually have a successful business, you don’t have to use [environmental awareness] for p.r. in order to fool people and make money.

Watson, a cofounder of Greenpeace and whom McCartney referred to as “the punk rock captain of the ocean,” famously drew ire from conservatives in the early Aughts when he stated worms are more important than people on this earth. He brought that same cheeky, subversive rhetoric to the panel, finishing the aforementioned story about pirates conducting illegal fishing with a sly smile.

“When we finally caught them, it took 200 hours to take in 72 kilometers of gill net,” he said. “That net is now in Adidas’ hands to make shoes.”

Watson, McCartney and founder of Parley for the Oceans Cyrill Gutsch also teased some news — as a celebration of the 40-year anniversary of Sea Shepherd, the three collaborated on a limited-edition backpack made of ocean’s plastic that Watson and his team has collected over the years. According to McCartney, it’s slated to go on sale in early July and will be shown on Wednesday night during her runway presentation.

“Fashion has to be about innovation,” McCartney explained. “It can’t just be about what’s the new silhouette, what’s the new color palette. It’s not important enough. I don’t sit in a room with other fashion designers. I am working alongside scientists, environmentalists, game-changers, story-tellers — this is a different way of approaching the fashion industry and I am honored to be doing it in this way.

“This I find way more inspiring than what’s happening in my industry. This is where I want to be.”