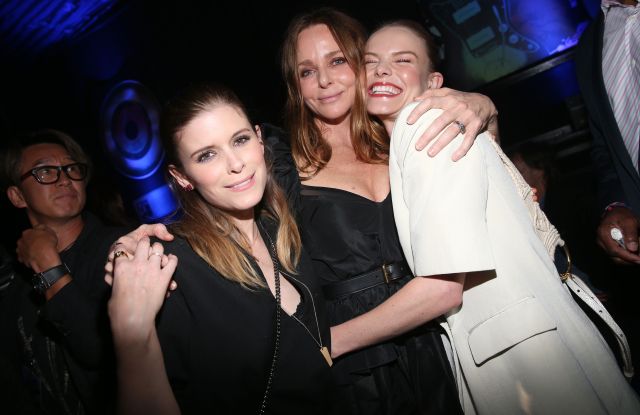 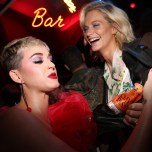 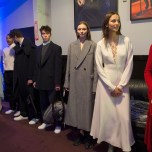 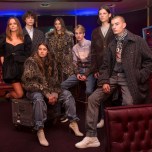 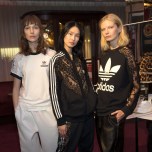 “It’s a Stella-bration,” Stella McCartney said of the hubbub of activity (and the neon signs) that surrounded her at SIR Rehearsal Studios in Hollywood on Tuesday night.

The designer elected to show her women’s and men’s pre-fall 2018 collections together in a combined presentation, party and mini music festival, which had many guests dubbing the event “Stella-chella.”

“I’m here with Ringo Starr, the coolest Beatle,” said Perry as she Snapchatted a selfie video with the rock icon. A moment later, she was joined by McCartney and her father, Sir Paul.

“We’re just here to have some fun tonight, you know?” said the designer. “This is really us celebrating the Stella woman and Stella man and how effortlessly sexy and natural we are, and just looking at modernity and responsibility and sustainability. And we’re celebrating old-fashioned rock ’n’ roll.”

Via graphic prints, textures and bold silhouettes, McCartney said she was evolving while continuing to meet her customer’s needs from day to night. “We’re looking at how to modernize them and change them up, but mostly just enjoying fashion and making it wearable in a way that feels new and not too overpowering,” she said. “It’s incredibly important for me as a woman designing for women and now for men, to bring that conversation into your wardrobe in a way that feels really effortless.”

Models lounged around in various rooms and onstage trying their best not to look excited when Borns, Leon Bridges and St. Vincent performed a few feet away. They were put to the test, however, when Dr. Pepper’s Jaded Hearts Club Band began performing The Beatles’ greatest hits, prompting Sir Paul McCartney to jump onstage to sing “When I Saw Her Standing There” and “Helter Skelter.”

His pals, including David Hockney, James Corden, Quincy Jones and Goldie Hawn (the latter two with their famous daughters in tow) went wild in a booth to the left of the stage.

“I’ve never been to one of Stella’s events, but I’ve worn her clothes many times, including when I presented at the Oscars last year. I love that she’s about empowering women,” said Olivia Munn, who was fresh off of hosting the Critics’ Choice Awards, where she took an unscripted jab at Mark Wahlberg for getting paid more than Michelle Williams for “All the Money in the World.” The next day, the actor donated his earnings to the Time’s Up Legal Defense Fund in Williams’ name.

Kate Mara was another actress appreciative of McCartney’s ethos. “You know, they weren’t going to let any more people in because it’s crowded, but I’m glad I came. I love that Stella uses vegan materials. The president of PETA is here tonight, and so is Darren Aronofsky, who’s a big animal rights supporter. It’s cool to be among people who share the same beliefs.”

Mara was in good company. Christina Aguilera made a rare party appearance, and while she didn’t perform (as Grimes and Beck later did), she said, “This is the year I’m going out, big time,” to promote her upcoming album. She later got down on the dance floor with McCartney.

For those who thought she couldn’t top her party last year at Amoeba Records, McCartney said, “Well, here you go, just you wait and see. Easily done.”