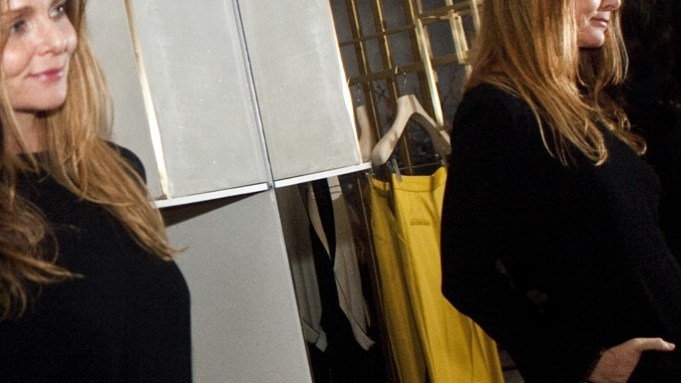 As a general rule, moving is not fun, but after all the hard labor, a celebration is in order.

Such was cause for Stella McCartney’s cocktail reception and dinner party Monday night, held at her shiny new SoHo store in Manhattan, where a generous portion of the shop’s elaborate herringbone parquet floor was given up to a long banquet table decorated with ice sculptures of the Empire State Building and Brooklyn Bridge. Where there’s a bridge, there’s usually water, so a moat filled with toy boats surrounded the elaborate centerpieces.

As for the guests, a strong “Saturday Night Live” contingent (Kristen Wiig, Fred Armisen, Jason Sudeikis and Lorne Michaels, an old pal of McCartney’s father) gathered, along with artists like Marilyn Minter and Cindy Sherman and McCartney loyalists like Liv Tyler and Naomi Watts.

Many of them were likely present for a similar occasion 10 years ago when McCartney opened her first store in the Meatpacking District. At the time, she was considered a trailblazer, a gentrifier of the neighborhood, which was still more synonymous with wholesale butchering than boutique retailing as it is today. The opening of the new store on Jan. 7 marked the closing of her 14th Street store, and perhaps the end of an era.

“The reality is our lease was up and we sort of questioned if we wanted to be down there or if we wanted to make a change, so we decided to come here,” said McCartney, over an omelette and canarino at the Mercer Hotel on Sunday. “I’ve always loved SoHo. I love the Meatpacking, too, but I think it was the right time for us to move into this kind of position. Maybe a little more grown up and taking it to the next level really in terms of our neighbors.” Her new Greene Street neighbors include Louis Vuitton, a temporary Apple store, Taschen and Tiffany.

McCartney added that the SoHo store allowed her to make a different statement than her previous space. It’s bigger by 1,200 square feet, for one thing, and its two floors are more richly decorated with gold Deco sculptures and Victorian finishes compared to the spare, squeaky clean look of the Meatpacking store, which, like most of the real estate there, had the feel of a gutted garage.

An evolution is understandable. A lot has happened in the decade that’s passed between McCartney’s first retail endeavor and her latest. SoHo is her 17th stand-alone store, with the 16th bowing simultaneously at the Bal Harbour Shops near Miami. “We’re definitely focusing on retail,” said McCartney, who, without getting specific on strategy, noted there are plans for a Barcelona store in the spring, as well as a second London outpost on Fulham Road in Brompton Cross scheduled to open next month. There, the format will be broken up into three spaces — one to house the main collection, another for the kids’ line and a separate but adjacent one for the first-ever Adidas by Stella McCartney store. “It’s a reflection of the world of Stella,” her publicist chimed in.

That’s not a bad way to compartmentalize the designer herself. There’s the sporty Stella, who’s held a long-standing contract with Adidas and has been chosen as the official designer for the British Olympic teams for London 2012. Then there’s the glamorous designer of expensive clothes who reconciles herself against her alter ego — devoted mother of four. The result is a strict time manager, who will only concede to short stints away from her family. She flew in straight from a holiday in Jamaica with them for this four-night trip to New York, which was all business, except for a break to watch Charles Barkley host “Saturday Night Live.” But McCartney is a pro at making work look like play.

An hour before she hosted Monday’s dinner, she was in the thick of a meet and greet at her pre-fall presentation held at the West Village restaurant One If by Land, Two If by Sea — a fancy, romantic spot that’s known as a place where couples go to get engaged. McCartney took over the whole townhouse, invited her guests in for an open bar and live music, while the models giggled in casual vignettes, playing backgammon and pool, dressed in tailored coats with caped sleeves, riffs on traditional equestrian gear and pieces printed with vintage monograms.

It’s been a few years now that McCartney has been staging these productions, “long enough for it to be completely normal for us,” she said. Conceived as a cute, carefree standout in a sea of off-season showroom appointments, the presentations masked as parties belie a lot of time, money and planning, which is likely why most designers stick to the showroom.

“It’s very funny, the industry. It seems very old fashion to me to look at it like, ‘We have a show in Paris and that’s that,’” said McCartney. “To me, it’s sort of like in the day and age we live, I want to make my online shoot and look book look like a magazine. I want to make a language.” All the effort implies the increasing importance of the off-seasons, though a question about the size and growth of pre-fall from a business perspective was deflected. “I never really focus on that,” said McCartney. “I let other people do it. I like to try to remove myself from that a little in that I have all the information of what we want to achieve but I’m not focused on that side.”

She acknowledged that the pre-seasons carry more pressure saleswise since they’re on the floor the longest amount of time, but that doesn’t preclude having a little fun. “My entire career, it’s always been like, oh, [pre-fall is] just a selling collection. It has so many boxes to check and it becomes such a chore and I just hated that. There’s more and more [to do] for all of us. I look at it not only from my point of view but from [editors’] point of view, like, why would you just want to go look at another showroom? What a drag.”