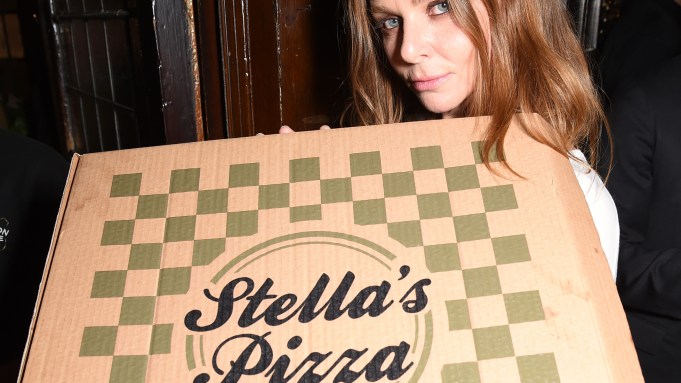 HEARING THE MUSIC: “Woo-hoo! Keep it in the family!” cried guests who’d crammed into the tiny courtyard of a 16th-century London pub to watch the premiere of a short film featuring Stella McCartney’s winter men’s wear collection.

The jolly bunch — fueled by Pimm’s, sparkling wine, beer and margaritas — cheered after the credits rolled, and particularly when they saw that Paul McCartney had composed the music for the surreal short directed by Sean Ellis.

In Britain, a lock-in is what happens at the end of a night when a pub officially shuts, and the owner lets a choice few guests party until all hours. McCartney said that when she was a teenager, it was her aspiration to be cool enough to be part of a lock-in.

With the pub keys in hand — at least for the night — she had other ideas. “I love this pub. I want to buy this pub,” said the designer as she circulated among models and friends including Tyler, who’d been at her Bruton Street flagship earlier in the day.

“I was ‘in my addiction,’” said Tyler with a smile as McCartney happily scrolled through pictures of him in his underwear trying on piles of clothes in the VIP room.

“Have you seen her store in Vegas? It’s women’s clothes, so I buy Christmas presents for my daughters Chelsea, Mia and Liv there,” added Tyler who was wearing a beige cotton-linen jumpsuit from McCartney’s spring collection.

Tyler is currently touring with Aerosmith, and clearly could not be happier.

“On that stage I become 17 again,” said Tyler, adding that he jumps around so much that he loses a pound at every performance. “I’m aching and sore for the first two weeks of the tour, but by the third week I’m back — I’m 17 — singing songs I wrote 40 years ago.”

He preps, he said, with workouts and healthy food. “It’s a plate of salmon and broccoli every night.”

On the other end of the tiny courtyard was Letissier, who was dressed in a bright red McCartney suit over a sweater that had an energetic-looking cat on it. She pointed to the sweater and said, “This is what I look like when I’m recording.” Her second album is due out early next year, “if I work really hard,” she added.

Letissier said she’s been wearing McCartney’s clothes for a few years now, but only got to chatting with the designer “at the latest Met Gala — in the bathroom — where all the most interesting conversations take place.”

Stella McCartney Back as ‘Designer for Tomorrow’ Patron