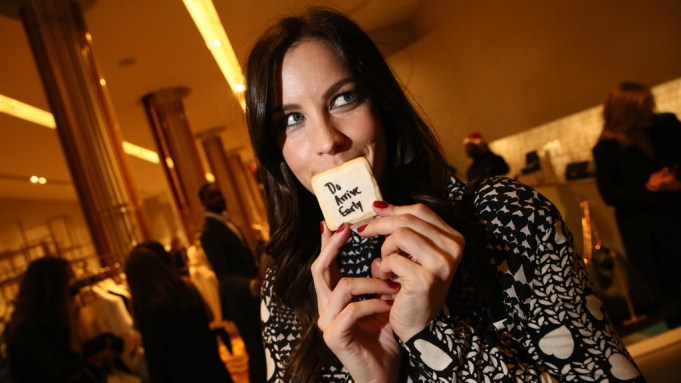 “Don’t you love gossip?” Liv Tyler said with a knowing grin on Tuesday night. “It’s so bad but I can’t help it!”

The actress was at the Stella McCartney store in Manhattan’s SoHo neighborhood, where a holiday-cum-book party was unfolding around her. The fete was thrown in the actress’ honor to toast her new etiquette handbook, “Modern Manners: Tools to Take You to the Top,” which she cowrote with her grandmother, Dorothea Johnson.

Grandma was next to her as the two hovered over an impressive spread of sugary treats — two cakes coated in blush and mint-colored icing with the words “Do” and “Don’t” frosted on them, stacks of sugar cookies, a pile of silver cake balls, bowls with hunks of rock candy spewing out of them and a vase with candy canes dangling out of it, cotton candy spouting out the top. The mere sight of it was enough to induce a toothache.

“Gossip’s the worst but we all do it,” Tyler continued, a shard of hot pink rock candy in her hand. Tyler and Johnson were assessing some etiquette infractions. On the least offensive side: elbows on the table and, clearly, gossip. Most egregious? Interrupting — “Oh, it’s so bad,” Johnson winced — and texting while engaged in conversation — “We’re too plugged in,” Tyler said. “Our mind is constantly in a million different places. No one gives full attention to each other anymore.”

A swell of supporters — several of whom were no doubt doing one of those two very things at that very moment — turned up to support Tyler and Johnson and partake in the holiday cheer. The storefront sparkled: twinkling, oversize cutouts of snowflakes lit up the front windows. Waiters adorned in deliberately tacky antler headdress and blinking snowmen pins wove through the room, pouring second helpings of bubbly for the guests, including Anya Ziourova, Alexandra Richards, Elizabeth Gilpin, Jim Gold, Natalie Joos, Hanneli Mustaparta, Misha Nonoo, Charlotte Ronson and Michael Stipe. Toward the back, a troupe of doo-woppers wearing Santa hats sang carols. Tyler soon joined them, spurring many partygoers to take Instagram shots.

“Sorry, I’m not listening,” one attendee was overheard saying to another, who just asked her a question. “I’m picking my filter.”

McCartney was busy on the other side of the Atlantic, too, where she herself hosted a party to celebrate the switching on of the Christmas lights at her Bruton Street flagship. Salma Hayek said she plans to spend the holidays in Paris with her six-year-old daughter Valentina Pinault. “I like to cook for Christmas and put up the tree with my daughter. She’s at the right age. She’s really getting into the decorations, and she’s really good at it. I’m lucky. It could have been a disaster!”

Guests including Sienna Miller, Judi Dench, John Frieda and Ronnie Wood grazed on mince pies and sipped mulled wine at the shop that was decked in red and gold star balloons, candy canes, Christmas cookie pops, Rudolph antlers, Santa hats and other holiday trinkets. Their celebrity entertainment for the evening was Dame Edna, who highlighted her eco-credentials before hitting the light switch.

“I know Stella is seriously into conservation,” she said of her flower-pattern black-and-lilac coat and furry stole. “This is humanely culled acrylic. It’s Australian road kill.”

McCartney said she plans to take it easy this Christmas. “I’m going to enjoy it with my family and friends,” she said. “And recuperate from the year.”