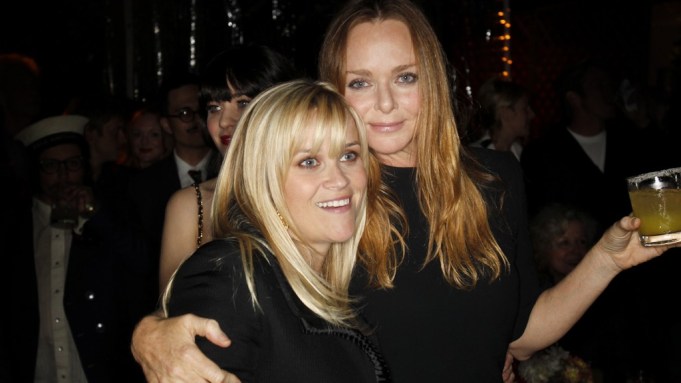 While many a Hollywood hipster hit Coachella this weekend, Sir Paul McCartney brought a little rock ’n’ roll to his designer daughter’s West Hollywood boutique on Friday night. Stella McCartney’s shop hosted the world premiere of her father’s music video for “My Valentine,” the first single off his new album “Kisses on the Bottom.” The one-time Beatle himself directed the black-and-white clip, which features Natalie Portman and Johnny Depp.

“The inspiration is Nancy [Shevell],” said the elder McCartney, referencing his new wife, who also attended. (He reportedly sang the song at their wedding.) “The actual video itself is inspired by Irving Penn’s photography.” He later told the crowd that his daughter encouraged him to make the video: “I said, ‘I’m not sure I want to do a million-dollar video.’ She said, ‘So do something really simple. You know, Natalie. Ring Natalie up and ask her if she’ll do something.’ I said, ‘That is a good idea.’ So I rang her, and she was so kind to agree to do it. Then I realized it was a guy’s song, so then I rang Johnny. And he very kindly agreed to do it. A week after Stella had mentioned the idea, I was back here filming it.”

The party came together just as smoothly. “It’s been an effortless thing,” said Stella McCartney. “It all happened quickly. We were just like, ‘You’re going to be in LA. I’m going to be in L.A. Let’s do something.’ ”

In a tented space behind the boutique, guests including Gwyneth Paltrow (later joined by husband Chris Martin), Gwen Stefani, Miranda Kerr, Orlando Bloom, Dave Grohl, and Woody Harrelson watched three different versions: one featuring Portman, the next featuring Depp, and one in which both actors deliver the song in sign language.

“Only Paul could pull that off,” said Jane Fonda, who attended with her music-producer boyfriend Richard Perry. Although it was her first time viewing the video, she’d already enjoyed a private listening party. “Paul came over to the house. We spent an evening together, and he played us some of the songs on the new album before it was released.”

Reese Witherspoon was among the attendees who said she’d met the singer previously. However, a fresh crop of Tinseltown (Kristen Stewart, Zooey Deschanel, and Rumer Willis) was eager to meet the legend.

“I’m going to chase him all night,” laughed Ginnifer Goodwin. “I’ve had a ginormous crush on him since I was about five years old and I went to my first Paul McCartney concert.” Meanwhile, Glee’s Jayma Mays debated, “I mean, what do you say to a legend? I’ve been working on my bow, but do I kiss the hands? I’ve been preparing for this moment for 32 years.”