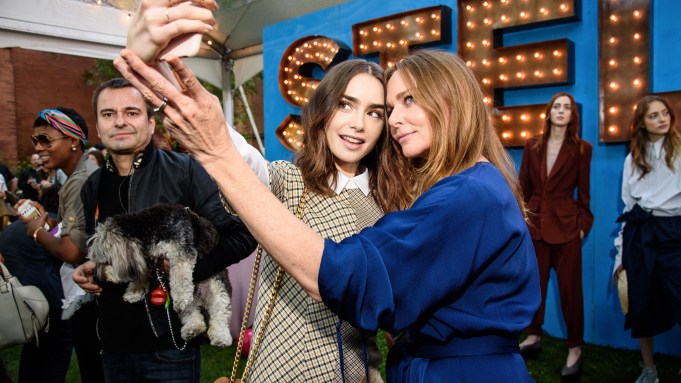 Thank Stella McCartney for bringing the tropical vibes to New York on Wednesday night. The designer threw her annual garden party in the backyard of the High Line Hotel, decking the scene with flamingo lawn ornaments, pineapples and models dressed in her spring 2018 collection, the night’s cause célèbre.

The models were free to roam through the party and mingle and shimmy along to the reggae music by Ky-Mani Marley and his steel drum band. The crowd included a mix of actresses and models, several of whom were also dressed in the designer’s newest wares — Lily Collins, Ashley Benson — as well as Debbie Harry, Alec Baldwin, Chris Rock and Lorne Michaels.

“I think it’s a very appropriate, fun way to do it,”  Harry remarked of the designer’s presentation format, which was divided into intimate spaces showcasing her various offerings. “I admire her position in life and what she stands for, and that she’s included it in her work, I think it’s brilliant,” Harry added.

“Pretty Little Liars” star Benson was enjoying some downtime — the popular show will screen its series finale later this month after seven seasons. “I just moved here to New York, so I’m just taking a break for a bit. I’m reading scripts and just enjoying my time off,” she added, before going over to greet Collins.

“Who doesn’t love a good parrot?” remarked Collins, turning toward the line of colorful birds perched under a “Stella” sign behind her. “I’m such a fan of Stella — as a human being and her brand — and I’m never around when she has a show,” she said. “I think she’s got the coolest London vibe — and she just threw a tropical party in the middle of New York City.”

The actress has three projects coming out this summer, including the Netflix film “Okja,” in which she plays a member of the Animal Liberation Front. “It’s very Stella, it’s very environmental,” Collins noted of her role. “Very on with the theme.”

See more from the 2018 Resort Collections:

3.1 Phillip Lim Resort 2018: A vacation to Bali and Jackie Nickerson’s book “Farm” brought a revived global vibe to the lineup.