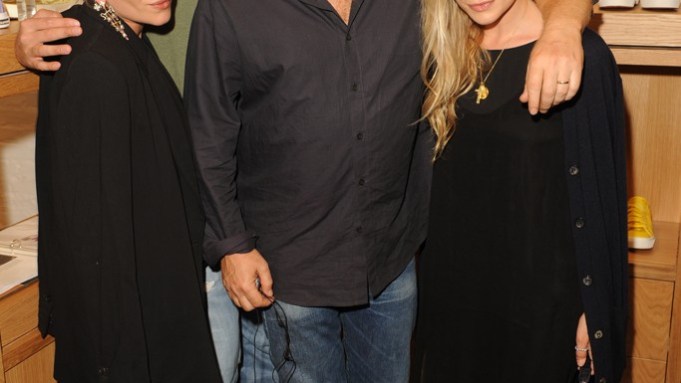 The subterranean level of the Crosby Street Hotel in New York was in bacchanalian splendor on Wednesday night for the American launch of Superga sneakers, with a warmly lit display of Italian comestibles surrounded by flowering vines and potted lemon trees scattered throughout the space. A vertical garden-cum-step-and-repeat proved a mossy green backdrop for the party’s sponsors, Steve Madden and Mary-Kate and Ashley Olsen. The Olsens are the brand’s new creative directors.

“We’re excited, Superga is a great sneaker, and we’re launching it,” Madden said, adjusting his navy baseball cap and surveying the crowd. “Mary-Kate and Ashley are friends of mine, and they wanted [Superga], so I got it for them.”

The new Superga retail location is directly facing the hotel at 78 Crosby Street, which at the time of the party had a lipstick red 1961 Alfa Romeo convertible parked in front, top down.

The Olsens appeared at the fete from an entrance behind the bar, a little over an hour after the party began. Both wore long, black drapy numbers by The Row and smatterings of jewelry of mixed metals.

Ashley shed a little more light on the genesis of the collaboration. “When we first met with Steve Madden, who we’ve collaborated with for a long, long time, I was wearing my old, beat-up Supergas…” she gestured at her feet, where, sure enough, her white pair were visibly scuffed, “and he said, ‘Oh, I’ve been wanting to buy that company,’ and I said, ‘Well, you know, if you do, please think of us.’ And now our styles for The Row have sold out in a matter of hours, when they first came online, and we’re thrilled. Really, we are.” Surely their fans will be disappointed not to be able to get the luxe styles? Mary-Kate smiled and linked the fingers of her hands together. “You just want to grab all the little baby ones, the little cashmere baby ones. They’re amazing.”