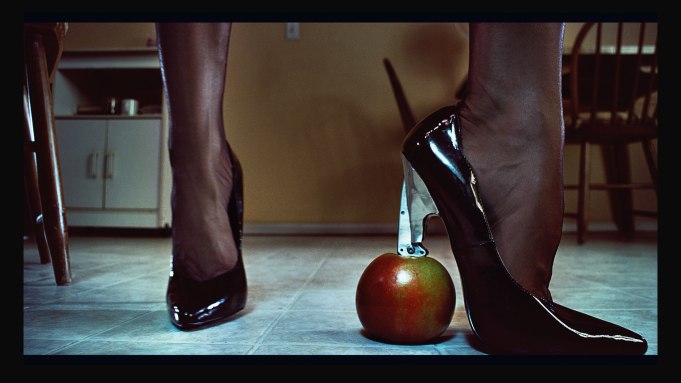 On Monday night, Visionaire and Steven Klein invited the photographer’s nearest and dearest — including Lee Daniels, jewelry designer Lynn Ban and Marina Testino — to Sotheby’s to celebrate the launch of Visionaire 67 Fetish. Little did guests know they’d be exposed to images of stiletto-wearing women dominating men in the most freakish of ways. Monday nights in New York aren’t ever dull, are they?

Titled “Fetish” for reasons that are immediately clear upon viewing, the exhibit features 10 prints from Visionaire 67 and four video clips from Klein’s “Fetish” video series. The theme was inspired mostly by the research he had done for his 2014 “Killer Heels” exhibition at the Brooklyn Museum.

“Shoes can be a fetish for different people for different reasons,” he explained at last night’s fete. “They can be powerful — and fragile because they can be very damaging to people’s bodies.” One video showed a shirtless man visibly enjoying himself as a woman in heels stepped all over his bare abs. Another focused on a woman — wearing knives for heels — as she cut an apple with her shoes. A third depicted a man, almost entirely naked, lying on his stomach while yet another woman — in heels — Swiffer-ed her way around his body.

“[Klein is] such a strong case for photographers who push the limits of what’s acceptable and where those images get published and he really has fought to publish the most extreme looks everywhere,” offered Visionaire’s James Kaliardos. “With some series there’s difficulty with how he sees women or what the subject matter is. We wanted to do a special edition with him and we were like, ‘This is so fantastic.’ A lot of people are afraid of the subject matter, but we love it and it celebrates both women and accessories in a new way.”

For Klein, who once shot a model breastfeeding twins for an Equinox ad, the exhibit is laced with notions of female empowerment — subversive as they may be. “I’ve asked people why women like to wear high heels and they feel more powerful in them,” he explained. “So the thing is, they are somewhat empowering to women. There’s gotta be a reason why so many women like heels and are drawn to shoes that are of that nature. They can use heels for many purposes. So the one [in which a woman scratches the hood of a car with her heels] can be interpreted many ways. It can be a way of somebody to have revenge on a partner, do you know what I mean? The ultimate male symbol is his car, so why not destroy a car with your heels?”

Shot in his studio over the course of two days, the images and accompanying videos are striking and bound to turn heads — and raise a few questions. Though he offered his own interpretation, Klein maintains that all is up to the viewer.

Klein’s work, which appears in Visionaire’s 67th edition, is also available as a limited-edition collector’s item. It retails for $1,000.