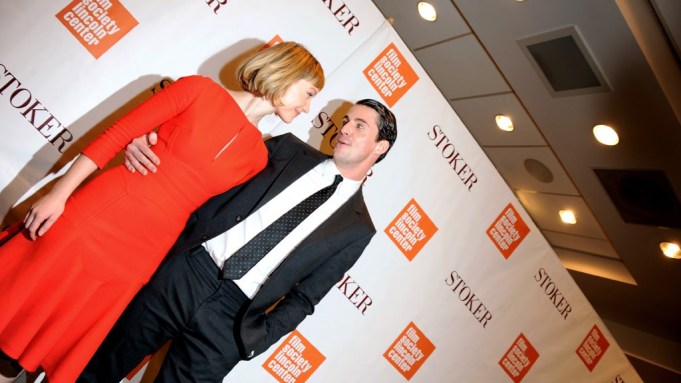 TOTALLY STOKED: Mia Wasikowska’s still young career has included an Oscar-nominated lesbian family comedy, a Tim Burton-ized green-screen fairy tale and a Charlotte Brontë period piece. Yet at the premiere of her latest film, “Stoker,” on Wednesday night, the actress had trouble defining the genre of her latest film.

“I guess it’s a psycho-sexual thriller?” the Elie Saab-clad Wasikowska offered on the red carpet at Manhattan’s Walter Reade Theater, where Fox Searchlight Pictures and the Film Society of Lincoln Center cohosted the festivities. Wasikowska plays the film’s despondent protagonist, India, who is left to live with her emotionally unstable mother (Nicole Kidman) and mysterious uncle (Matthew Goode) following her father’s sudden death. “Stoker” marks the American debut of famed Korean director Park Chan-wook, a name that drew the talented cast, despite an on-set language barrier.

“[He] understands more English than he speaks, and like anyone, if he’s had a couple of drinks in his system, then he’s so much more forthcoming,” Goode explained. “He had a brilliant translator on set. It took a few days, but then it was all running very smoothly.”

Sporting an Alexander McQueen suit, the British actor backtracked along the press line upon Wasikowska’s arrival.

“You look gorgeous — who are you wearing?” Goode asked, greeting his gamine costar with a kiss on the top of her head.

Though Kidman was absent, Wasikowska gushed about her fellow Aussie.

“She is such a role model for me, especially coming from Australia,” said Wasikowska. “She just completely took me under her wing. It was wonderful.”

Following the screening, guests had a short commute to the after party at the Frieda and Roy Furman Gallery just a few steps outside of the theater itself. Wasikowska, who changed into a silver Simone Rocha frock, and Goode gamely took pictures and chatted with nearby guests.