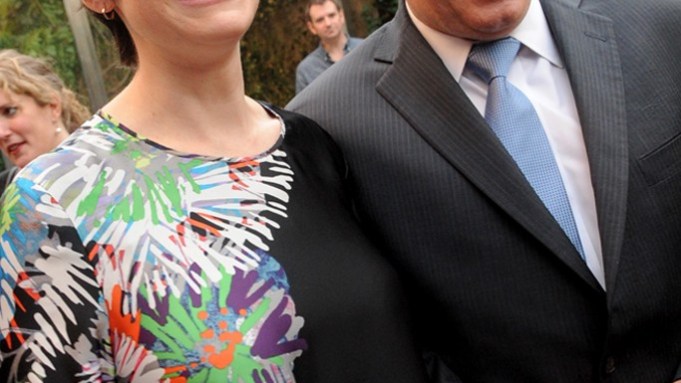 Around 7:30 p.m. Tuesday, Young New York was restless. A fashionable crowd crammed into the snug north terrace of the Maritime Hotel in Chelsea, sipping Peronis under Chinese lanterns, and nothing was happening. They were all there to raise money for Scott Stringer, the Manhattan borough president who is running for city comptroller. But the event, literally dubbed “Young New York for Scott Stringer,” was missing its nucleus. Lena Dunham was late.

Stringer, making his way through the thicket, greeting some supporters and taking questions from reporters, looked out of place among several young Vogue editors, like Chloe Malle; the photographer Cass Bird; the blogger Leandra Medine, and the designers Pamela Love, Prabal Gurung and Stacey Bendet Eisner. Stringer is an avuncular man who has the countenance of an Upper West Side accountant. But in his past two runs for office, he has thrown a party at the club-land standby Maritime and managed to rope in a hot starlet to sex up his campaign. Last year, as he prepped an ultimately unsuccessful mayoral run, it was Scarlett Johansson. About 600 people attended, the New York Observer reported at the time. This time, Dunham was the star attraction, and she drew 526 guests, according to the doorman.

Of his star supporters, Stringer said, “What they have in common is they’re New York kids. They had a dream. They wanted to succeed and New York is a place of opportunity.”

Stringer’s shot at comptroller, a job and a race not many had shown much of an interest in, seemed all but assured until former New York Gov. Eliot Spitzer steamrolled in and upended the race in early July. So a celebrity endorser was again welcomed. A few days after Spitzer announced his run, Dunham threw her considerable Twitter clout behind Stringer with a tweeted endorsement. The assist was facilitated through Stringer’s press secretary, Audrey Gelman, a longtime friend of the actress who has made cameo appearances on Dunham’s HBO series, “Girls.”

Before the actress arrived, the most well-known names in the room were Congressman Jerry Nadler and James Truman, the former editorial director of Condé Nast.

“When she walks in, everyone’s going to realize this is a campaign you want to be involved in,” Stringer told WWD.

Truman was there with his wife, Leanne Shapton, also on the hosting committee.

“I was sent a link to buy a ticket, and I did as I was asked,” he said. He had been to a prior Stringer fund-raiser, a seated dinner for 16, and “it was quite expensive, it was a niche crowd.” He attributed the larger turnout to the dislike toward candidates like Spitzer, who left the governor’s mansion after a prostitution scandal in 2008, and mayoral hopeful, and habitual sexter Anthony Weiner.

“This guy is a straight arrow, he doesn’t have that complicated baggage and he doesn’t seem like a scumbag,” Truman said of Stringer.

The sleepy room pivoted and cameras flashed when Dunham arrived some time after 8:30 p.m. to pose for pictures with the candidate. Other celebrity members of the hosting committee, Johansson and Bobby Cannavale among them, were no-shows. The room hung on Dunham’s every crack. Apparently she had to look up the meaning of the word comptroller.

What compelled Dunham, who is not a registered Democrat and can’t actually vote in the primary in a few weeks, to endorse any candidate, wasn’t particularly clear. She explained to the crowd that when she was considering it, she was thinking about the effect of gentrification on her beloved Manhattan.

“I grew up in the SoHo that was full of galleries, where my parents graduated college and were able to live in a loft for $350 a month,” she told the crowd. “Now, the building I was born in houses a Victoria’s Secret and is next door to a Sephora.”

And so her vote is going to Stringer.

“We need a candidate with a record of respecting women, and the issues that matter to them,” she said, to applause.

After Dunham introduced Stringer, the air went out of the room, even if the candidate, an afterthought at his own fund-raiser, still had to deliver his remarks. Dunham left shortly after he finished, without speaking to reporters, sneaking out through a side passageway, and Young New York soon followed. She had a 5:30 a.m. call time the next day, Gelman explained.

On Wednesday afternoon, Dunham took to Twitter to explain that she had reregistered as a Democrat — in Brooklyn.