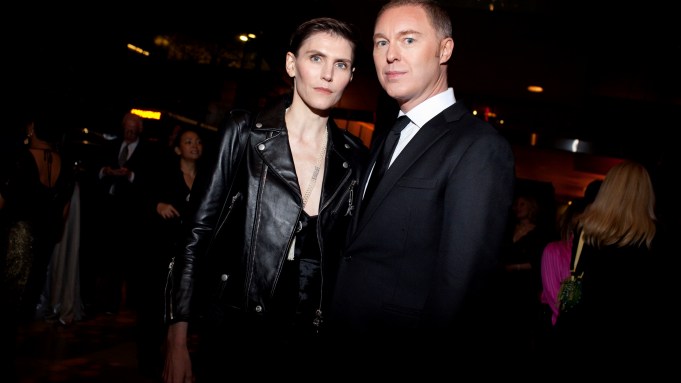 Ahead of a performance by Chaka Khan, Whoopi Goldberg spent much of her hosting duties onstage ribbing the reserved crowd for their lack of exuberance — and, post Whoopi, the crowd remained dancing on their feet for Khan’s set.

Dance troupe House of Gorgeous took the stage ahead of Khan, clad in festive, shimmering fuchsia ensembles, giving the rather conservative Lincoln Center crowd some high energy, pearl-clutching moments with their performance.

Vevers was joined by Tommy Dorfman, Dee Ocleppo and Tommy Hilfiger, Gabriela Hearst and Paloma Elsesser for the night, which is co-hosted by Bazaar editor in chief Glenda Bailey and benefits Lincoln Center’s resident arts organizations.

Vevers and Hearst exchanged “oh my god!” upon seeing each other in the entryway of Alice Tully Hall. Later, Hearst would take the stage with Vevers’ husband, Benjamin Seidler, to present Vevers the award.

“It’s amazing,” Vevers said of the recognition, toward the end of the cocktail hour. “We all work so hard and I’ve got an incredible team and to be recognized for that work, over the last five years, is really special. It means a lot.”

In his acceptance speech he credited New York as being the place that finally allowed him and Seidler to live in the same place, and Seidler is also responsible for many of his Lincoln Center moments.

“Actually my husband loves dance, and he definitely kind of got me into dance – so we’ve been to the Alvin Ailey a few times, which is always amazing. But I never can remember all the titles of everything!” Vevers said. “I went to see the ‘Call me By Your Name’ New York premiere here, where all the actors spoke afterwards – that was incredibly special.”

The two will spend the holidays in the U.K., visiting family. “I love dressing the tree on Christmas Eve, that’s one of my favorite moments,” Vevers said of his favorite traditions. “But just drinking, eating, having fun, just like everyone else.”

Swarovski Toasts Rockefeller Center Tree Lighting — Away From the Madness

Charles Melton Wants to Be Your Next Heartthrob