Georgia May Jagger, Suki Waterhouse, Lily Donaldson and Winnie Harlow were among the guests. 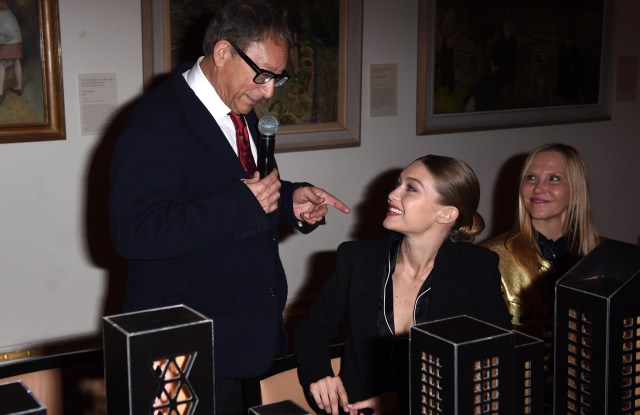 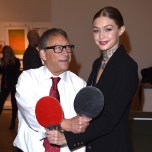 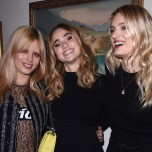 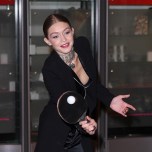 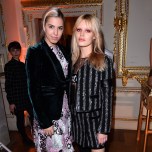 CENTER RING: “I don’t think I’ve ever seen so many Stuart Weitzman boots in one room — I just wish you had paid for them,” the shoe designer told Suki Waterhouse, Lily Donaldson, Amber Le Bon and Georgia May Jagger, who were all wearing his designs for a celebratory dinner at London’s Royal Academy of Arts on Monday night.

The models were wearing Weitzman’s signature over-the-knee, block-heeled “Tieland” boots at the dinner he cohosted with Gigi Hadid to mark the opening of his new store on Regent Street, which is fast becoming home to big American brands including Polo Ralph Lauren, Michael Kors, Kate Spade New York and J. Crew, all of which have recently opened on the big shopping thoroughfare. Weitzman parent Coach will have its moment next week with an event to mark its opening next door to the new Weitzman store.

Hadid was the only one not wearing the boots. Instead, she opted for a pair of strappy black and white sandals, which she matched with a satin pajama-style suit and a choker. She arrived at the party on the arm of Mario Testino, who had delayed a flight in order to attend the event. The two opted for the ping-pong room — instead of the dance floor — and Hadid played a round with Weitzman — a longtime aficionado of the sport — stopping from time to time to climb onto the table and pose for pictures.

Weitzman said he was drawn to Hadid’s athletic spirit, which is why he chose her to be the face of the brand. “I liked her attitude. She’s a charitable, smart, athletic girl; seems like the all-American girl to me. We previously worked with Kate Moss and Gisele [Bündchen], so it was great for her to follow that legacy,” he said.

Hadid posed nude alongside Lily Aldridge and Joan Smalls in the brand’s spring 2016 campaign. For the fall ads — where she wore clothes — she took a more athletic turn, channeling her love of boxing. That latest campaign was accompanied by the launch of the “Gigi” boot, a metallic lace-up style that’s in the window of the brand’s new Regent Street store, showcased in a miniature boxing ring.

Weitzman said he worked closely with Hadid to create the new ankle boot style. “She wanted a boot that can be tight to the leg for skirts or left open for jeans and [she wanted] to make it a little jazzy. So we came up with this Space Age material that’s actually used as protection on spacesuits.”

To celebrate their collaboration Weitzman also pledged to build three schools in Ghana, Guatemala and Laos with the charity Pencils of Promise.

The designer said he was drawn to the renewed energy of the busy shopping thoroughfare. “I like business, I like to move goods, I like traffic. Between Oxford and Regents Streets, Regent is the better grade, and I feel a movement more towards that street,” he said.

“More brands that have previously only housed themselves on Sloane Street are coming more toward Regent Street because the business is terrific, so we thought we’d get in in the beginning — before it gets too expensive. There are also many other places in London where we can support a store, so the success of Regent Street will lead us elsewhere.”

The store — a sleek, polished space spanning 1,500 square feet and featuring marble and gold-toned displays — is stocking the brand’s extensive boot ranges for fall. It follows the launch of Weitzman’s concession in Harrods’ shoe salon, where the brand has been among the best-performing, with its over-the-knee boots having become a staple in many Londoners’ wardrobes.

“Every brand wants to create identifiable products, and for us it just happened, the public voted for it. We cover footwear from flats and sandals to evening shoes and boots for women of all ages, so our expansion would be outside of women’s shoes,” said Weitzman, pointing to the brand’s plans to launch handbags in the next year.

During dinner, where guests ate Jerusalem artichokes and halibut followed by an apple tarte tatin, Waterhouse took short breaks between courses to take selfies behind the art on display. She has been spending a lot of time in the U.S., and has recently been working on acting projects. Next year two of her movies will launch, “Billionaire Boys Club” and “Future World.”

Fine jeweler Sabine Getty was also in attendance. “I’m six months pregnant, but I still like to go out a bit and everything is going according to plan for my brand, too,” said the jeweler, who is planning to launch a lower-priced line, as well as e-commerce next year.