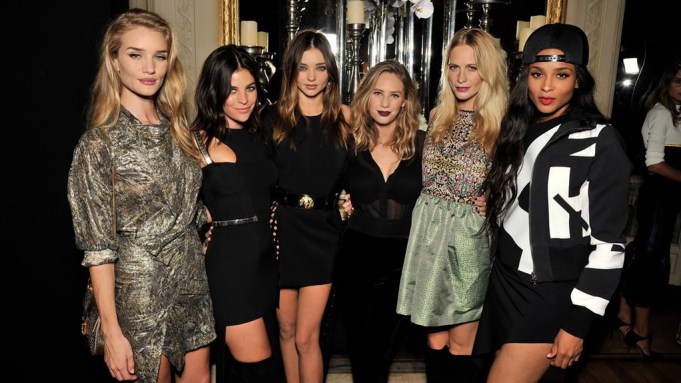 “Two incognito blondes on a wild adventure.” No, that’s not the plot of an old film-noir thriller. It’s how Poppy Delevingne summarized a two-minute short she stars in with newcomer Dylan Penn, Sean’s daughter with Robin Wright. The two of them were at its screening Monday night in Paris.

“Dylan’s the cool L.A. biker girl, and I’m an English girl from the English countryside with my own bicycle with a basket,” said Delevingne before stating the obvious. “That probably says a lot about our personalities.”

Penn’s father is an acclaimed actor with two Oscars to his name. But all 23-year-olds must start out someplace, even if they have famous parents.

So she recently wrapped her first feature, a horror film called “Condemned.” “I play a 16-year-old girl who runs away from home to live with her boyfriend in this condemned building in New York City. All tenants get infected, but I don’t,” she said. At least being Hollywood progeny counts for something these days.

Acting is all well and good, but like her tempestuous father, who went on to make several films as a director, what the cutest of all the Penns really wants to do is direct herself.

“Writing and directing or both — that’s what I’m most passionate about. But right now, it’s so much fun to have these opportunities,” she said. That seems to be the case with famous daughters these days — the person behind the camera for Delevingne and Penn’s short, really an ad for Stuart Weitzman, was Julia Restoin Roitfeld, Carine’s oldest.