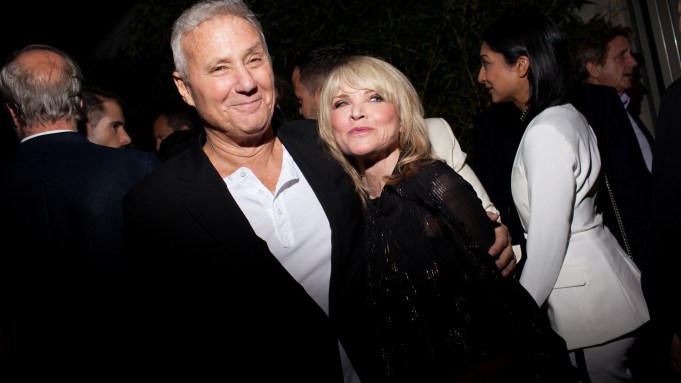 Studio 54 reigned again Thursday night, when Ian Schrager brought the nostalgia to his new iteration, Public Hotel, for a screening of the documentary “Studio 54,” followed by a late-night party.

“It was exciting preparing for this. The whole thing was much more exciting than actually being here and kissing everyone,” Schrager said between cheek-kisses atop the roof. “I like to see everybody having a good time. I like to see the place crowded and it’s always kind of exciting for me to see that. Not to be in the middle of it, but to see it.”

The experience of the film’s production was an emotional one for him.

“It was very personal,” he said. “Overall, I wanted to be part of something that was a real quality film, that was a real project. We’re being considered for a nomination for an Academy Award, and I love that we’re being considered and I would love to get it. But seeing the film, I still get a little embarrassed by it — it’s still very revealing, and very personal. I told Bob De Niro ‘all the things I wanted to take out of the film are all the things that make the film good.’ So I’m happy with it. A lot of the things happened 40 years ago, and we seem to forget the bad things and only remember the good things. So I was thinking to myself, ‘why would I want to remind everybody of those things?’ But at the end of the day, I wanted to be involved with a good film.”

In between prepping for the big opening night, Schrager has been keeping up with lots of American history reading.

“I just finished reading, for the second time, ‘The Best and The Brightest.’ I’m reading a George Washington biography by Joseph J. Ellis. I’ve just finished the Franklin biography by the same guy who wrote the Steve Jobs biography, Walter Isaacson, who I happened to have met,” he said. “I love American history — I love getting inspiration for today by reading about great men of the past.”