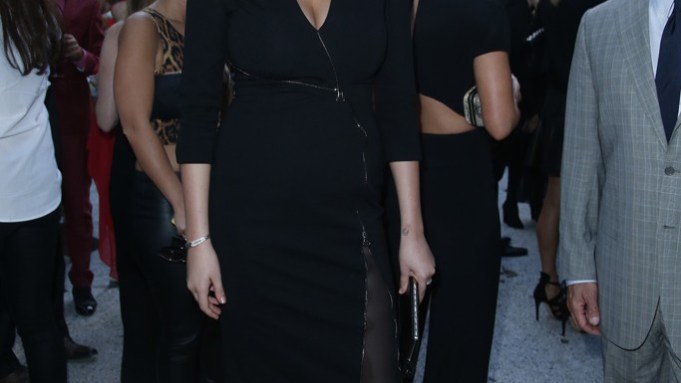 NEW YORK — Maybe it was all the cue cards, the preshow clapping lessons or the Lincoln Center setting, but somehow Wednesday night’s Style Awards fell flat.

Sure, there were VIPs like Nicole Richie, Kate Upton, Patrick Demarchelier, Frédéric Fekkai, Maria Sharapova and Christie Brinkley. And Italo Zucchelli, Amar’e Stoudemire and Public School’s Dao-Yi Chow and Maxwell Osborne did what they could to up the cool quotient. After catching faint traces of Ariana Grande’s backstage warm-up while the 10 awards were presented, the crowd piped up when she sang “Tattooed Heart.”

All in all, though, the fashion week curtain-raising festivities seemed a little too self-made. Victoria’s Secret model Lily Aldridge presented the Most Visible Brand award to Victoria’s Secret. This year’s Most Stylish Athlete, Victor Cruz of the New York Giants, scored big with product placement in his fast-talking acceptance speech, deftly thanking 25 brands and people, including Calvin Klein Inc., Michael Bastian, Graydon Carter, Annie Leibovitz and his sponsors IMG and Nike. Even the event’s likeable host Richie appeared to overreach, changing four times in what will amount to an hour-long show on CNN on Sept. 14. “Robes are very in right now, so if you guys don’t get it, then you guys are very late,” she said. “Are you guys down with my [Tom Ford] robe? I’m like totally down.”

During lags in the taping, comedian Sherrod Small was brought on stage to try to warm up the crowd. Try being the operative word; at one point he pretty much berated Upton about what she would do for a day with a man’s most-valued anatomical weapon. “I’m all set with all my lady parts,” said Upton, this year’s Model of the Year.

Upton offered a different view of her signature style, “I’m only 21 years old and I’ve been on all seven continents. Unbelievable, I know, right? And in a bikini on all seven.”