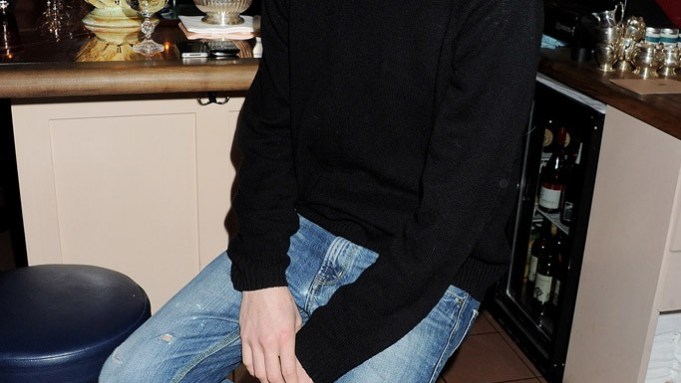 LONDON — “Watch out, we’ve got a rush on,” Giles Deacon said as he watched a gang of fellow designers — including Charlotte Dellal, Mary Katrantzou, Marios Schwab, Christopher Kane, and Lulu Kennedy — arrive at a dinner hosted by Style.com in London Tuesday night.

Deacon was propped up near the coat rack chatting to Dirk Standen, Style.com’s editor-in-chief, as guests arrived at the pop-up restaurant in an old gas station in King’s Cross.

Over margaritas and quesadilla canapés, Erdem Moralioglu carefully sidestepped questions about whether he was off to become Schiaparelli’s creative director — and then quickly changed the subject.

“That’s the first I’ve heard of it; it’s news to me,” he said. “But I’ll tell you another rumor: I’m getting a tattoo. Dinos [Chapman] is going to do it for me.”

Chapman, who was at the party with his wife Tiphaine, actually has some experience in that particular medium. He once tattooed his brother, and his children are eager to show off some of his tattoo work, too.

“Our daughters have been begging,” said Tiphaine. “And I think I’ll let them. He’s an excellent drawer. I wouldn’t want one for myself, but if I did, I’d let him do it. I have a charm necklace that I’ve been building up for years, and Dinos knows which ones are special to me. He’d do a good job.”

Her secret? The Escentric Molecule collection of fragrances. “Me and my boyfriend have a real passion for it. We both use it but we’ve run out and so has Harvey Nichols,” she said. “I swear, for both of us, the daily average is five people trailing you to find out what it is.”