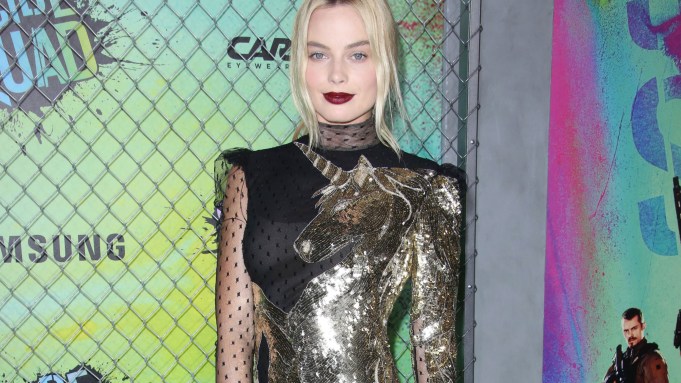 Summer superhero blockbuster-to-be “Suicide Squad” took over the Beacon Theatre for its world premiere on Monday night, and much of the theater’s periphery was swarmed with hordes of fans toting posters and signs, craning to see the film’s all-star ensemble cast on the long stretch of red — well, make that black — carpet. They were all there: Jared Leto, Margot Robbie, Will Smith, Viola Davis, Scott Eastwood, Cara Delevingne, Adewale Akinnuoye-Agbaje and director David Ayer, just to name a few.

“We’re a weird, weird bunch of brothers and sisters,” Robbie remarked of the synergy between the cast, shimmering in a unicorn-sequined Alexander McQueen gown. “When I signed onto this [movie], there was no script, no other cast member attached. I didn’t even know the comics, all I knew was that David Ayer was writing and directing. That’s all I had to go off of, and I was like, ‘Sign me up,'” the Aussie actress said. And after bringing Harley Quinn to life, Robbie is a convert to the DC Universe. “I became a comic book fan because of this movie and now I’m obsessed with them.”

While the characters littering the movie are generally more out-there than the personalities snaking down the carpet, the glue that bound “Suicide Squad” together was unanimously Ayer. “This character is really an interesting character,” said Smith, one hand on Ayer’s shoulder. “He’s pretty-looking with a smile, he’s beautiful, he’s handsome. I took this movie without a screenplay based on how much I love his work. He’s the truth.”

Leto described his character, the Joker, with less shining accolades: “A completely insane madman with green hair and a great smile.” He’s known for his Method approach to acting, and admitted he struggled with his character’s defining trait. “I don’t really have a big gregarious laugh, personally, so I was a bit terrified because this is a guy who is laughing and laughing at who he is: very unique,” he said. “So I worked on it, worked on it, worked on it, and came up with something that is very strange.”

After the screening, attendees rolled over to the after party on a fleet of buses. “Oh look, there’s actually barbed wire and a fence, isn’t that cute?” exclaimed one guest upon seeing the entrance to Moynihan Station, which very loosely channeled the exterior of a prison — only in this case, most people wanted in, not out. Newly minted star Karen Fukuhara dutifully meandered over to the crowd for pictures before marching past the chain link fence-lined entrance.

Inside, Cara Delevingne and St. Vincent were visibly affectionate in a side booth, while Leto camped out with bestie Alessandro Michele, the pair twinning in their respective Gucci ensembles. Even Harley Quinn had come out for the revelries, hanging out on a fabric trapeze inside a giant wire cage above the bar — a stand-in, though, as Robbie was taking a break from her character and nibbling on a slice of Roberta’s pizza. Elon Musk was also making the rounds around the cavernous venue, although presumably he’d skipped out on the bus transportation. He may not be part of the official squad, but the Tesla titan achieved any die-hard fan’s ultimate squad goal: a photo alongside Leto and Robbie.