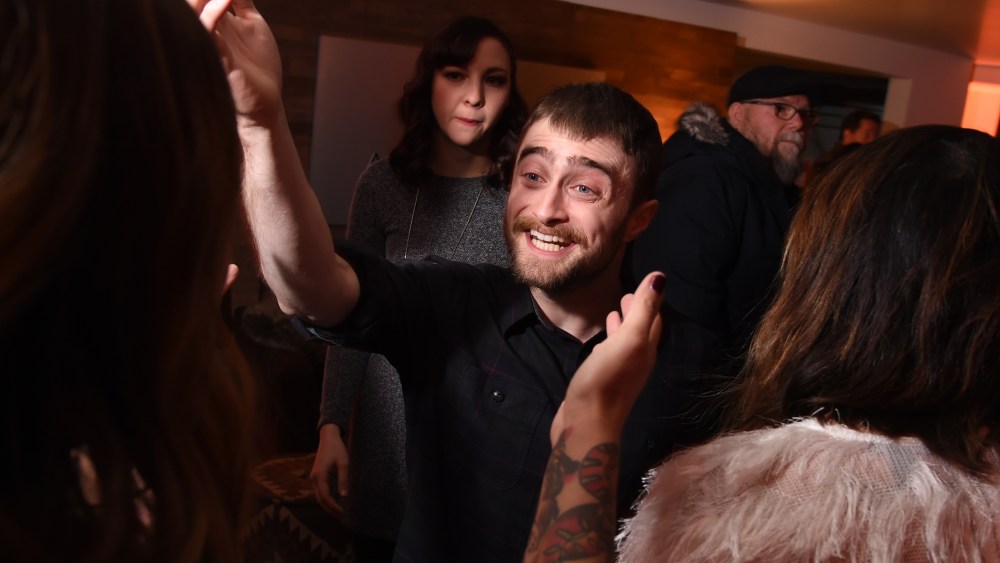 The first weekend of the 2016 Sundance Film Festival got off to a slower than usual start, in part because the East Coast blizzard wreaked havoc on actors’ travel schedules. The group assembled for this year’s batch of nearly 200 films – festival mainstays such as Chloë Sevigny, Greta Gerwig, Ellen Page and blockbuster stars such as Matt Damon and Daniel Radcliffe — also tended to be of the more low-key (relatively speaking) sort, while media magnets like Lada Gaga, Paris Hilton and Jessica Alba were not trotting down Main Street.

But that didn’t stop some fans from going wild. On Friday night, a gaggle of young girls, iPhones in hand, stood outside the glass window of a Park City restaurant rechristened the Acura Studio hoping for a glimpse of “Harry Potter” star Radcliffe. The actor was on hand for a post-premiere celebration of his film “Swiss Army Man” alongside co-stars Paul Dano and Mary Elizabeth Winstead. After posing for photographers, Radcliffe turned toward the crowd and waved, prompting a round of shrieking. Radcliffe — who plays a corpse that’s washed ashore and befriended by Dano’s character (the film was dubbed one of the indie-fest’s most bizarre ever) — said he was attracted to the project’s oddball approach. “It was so mad and beautiful,” he said of the script. “For something to be so stupid and so heartfelt at the same time? That very much appeals to my sensibility.” “I was a fan of [filmmakers Dan Kwan and Daniel Scheinert] work beforehand,” said Dano, flanked by his writer/actress girlfriend Zoe Kazan. “Their creative spirit is why I wanted to be involved. It’s a really beautiful, young group of people.” “It’s unlike anything I’ve ever seen before let alone anything I’ve ever done,” added Winstead. “I saw it for the first time a couple days ago, which is good because if I’d just seen it for the first time now, I’d be so in shock.” The group got along so well that they’re all staying in a house, which might have explained the dearth of parties on Main Street. “Last night, we had a party,” said Winstead. “We all prefer to be at somebody’s house with friends and having drinks and dancing.” Radcliffe agreed, “I’m really not into the parties. I will be going to them, I’m sure, but that feels much more like work.”

Also that night, the cast of Todd Solondz’s quirky tragicomedy “Weiner-Dog” convened at the Chase Sapphire Preferred Lounge after the film’s premiere. “This was the first time I’ve shown it to anybody,” said the director. While Gerwig’s character Dawn Weiner is a grown-up version of the teen played by Heather Matarazzo in Solondz’s “Welcome to the Dollhouse,” he said, “They are different actresses. I adore Greta and I was grateful that she was so responsive.” Kieran Culkin professed a similar affection for his director. “I was called on a Monday and was shooting by Wednesday. There was no time to get ready but because I love Todd’s work so much, I’d say literally, ‘Tell me what you want me to do and I’m just going to try and do it.’”

Elsewhere, Clea DuVall, Danny DeVito, India Menuez, Mia Moretti, Rachel Grady, Heidi Ewing, Chloë Sevigny and Natasha Lyonne hit up the Stella Artois Filmmaker Lounge for a festival “kickoff” party. The latter two actresses were in town promoting their horror film “Antibirth,” in which Lyonne’s character begins seeing visions after a night of partying. “Oh. You want to do like a whole interview?” laughed Lyonne, before discussing the project. “We knew the writer/director Danny Perez. He wrote the movie for us. So how could we say no?” she said.

“We’ve made a couple movies together — ‘If These Walls Could Talk 2’ and then ‘Party Monster’ solidified it,” added Sevigny, who said they first met twenty years ago through a mutual friend. The actresses hope to continue collaborating. “There’s something we’ve always wanted to do together: a period, buddy, slapsticky kind of thing. One day,” said Sevigny. For now they were close to calling it a night since each has multiple projects at the festival. (“Love & Friendship” for Sevigny and “The Intervention” and “Yoga Hosers” for Lyonne.) “Tomorrow morning I have my big press day, so tonight I have to hit the hay,” sighed Sevigny before heading out shortly thereafter.