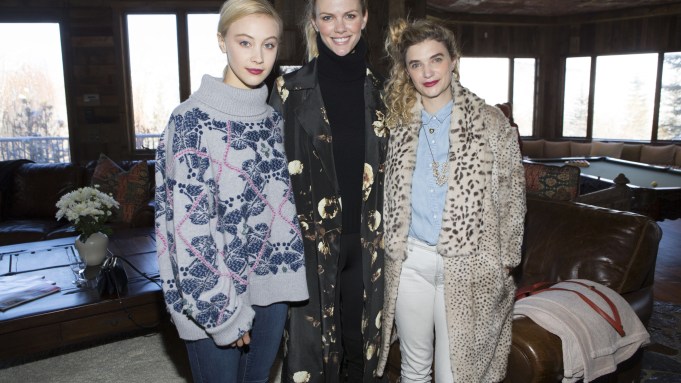 In the mountains of Park City, Utah, above the screening rooms and interview venues in town, some of the Sundance Film Festival’s most notable female filmmakers and actresses got together to network over an intimate, 32-person lunch.

On Tuesday, Lena Dunham, her producing partner Jenni Konner and Cindi Leive hosted Glamour’s Women Rewriting Hollywood lunch at the Park City home of producer Mimi Griswold. Griswold, who founded ChefDance, a dinner series featuring celebrity chefs that runs concurrently with the fest, said Leive convinced her to open her lavish mountainside home for the event rather than use a restaurant venue in town, a smart move that provided guests with a respite from the Main Street hubbub. The event drew Katie Couric, Rosanna Arquette, Rebecca Hall and Dawn Ostroff, among others.

Dunham, fresh from the premiere of the HBO documentary “Suited,” coproduced by her and Konner, was on a natural mountain high. “It was amazing to see how a documentary about fashion [the film focuses on a custom suitmaker business and their transgender clientele] could be so affecting and shape so many peoples’ world view. I’ve been in a lot of screenings in my day, and it was a really inspiring one,” she said. “My thing about fashion is I just like to have fun and express myself and it’s really important to me, especially as a woman in Hollywood, to always get dressed in a way that makes me feel good and that’s what the movie is about — feeling good in your body and in your clothes and not prescribing to ideals of society when it comes to getting yourself dressed. You can relate to that whether you are transgender nonconforming or if you are a chubby girl who likes to have fun.”

Leaning against an enormous stone pillar, Chloë Sevigny and Bryce Dallas Howard, who met while making Lars Von Trier’s “Manderlay” years ago, were having a happy reunion. “I assumed you had been here a lot and was wondering how much the festival had changed,” said Sundance newbie Howard, who has a short film, “Solemates,” in competition. “It feels kind of the same as in 2003 when all the branding and gifting had already taken off. It’s more about the movies now. It’s unlike the European festivals where a picture comes in with all the big stars and steals all the press. Here I feel like each film gets their due course,” Sevigny observed.

Over by the massive fireplace, Brooklyn Decker and actress Megan Ferguson were chatting it up, mimosas in hand. Decker has a small part in the So Yong Kim drama “Lovesong” and Ferguson is in the closing night film “The Fundamentals of Caring” and also in the buzzy Jill Solway-produced Refinery29 Web series “The Skinny,” also premiering at the festival.

“Making these tiny little things with a small crew and then bringing it to something as big as Sundance is a really interesting experience,” said Decker. “I’d never been to Sundance before but I have two projects to support, both very different. This is a cool event — lady bosses abound, producers, directors, writers,” Ferguson said, surveying the female-heavy room. “It’s slightly intimidating.”

Sarah Gadon, who arrived solo, must have been thinking the same thing. “I know no one here,” she confessed, before being swiftly introduced to some new friends. Most, like Imogen Poots, were enjoying making new connections. “I’m rather smooth,” said Poots, after segueing the conversation toward fellow actress Kate Lyn Sheil. “Perhaps I should be a publicist.”