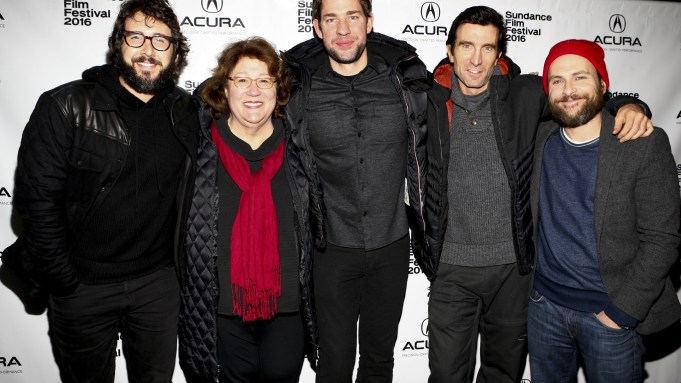 Barack and Michelle Obama — or at least the actors who portrayed them in “Southside With You” — were in the house at the film’s post-premiere party Sunday afternoon at the Rand Luxury Lounge at the St. Regis Hotel in Park City. Parker Sawyers and Tika Sumpter star as the future First Couple, in 1989 and on their first date. John Legend executive produced the project alongside writer-director Richard Tanne and Sumpter. “The minute I saw the synopsis, I was like, ‘We have to get this made,’” she said. “I wanted to see a strong woman who is intelligent fall in love. She stood in her own greatness regardless of who was next to her. And it’s a love story. Who can’t relate to a love story?”

Sawyers, who plays the young Barack, said, “It wasn’t that daunting tackling this part because I respect President Obama. Not only as a politician, or as the first black president, but for what he’s done in his life.” While principal photography began just six months ago, the actor said he’d long been preparing for the part without even knowing the project existed. “This is not name dropping, but Kathryn Bigelow and Oliver Stone both told me I look like the President,” he said. “I was filming ‘Snowden’ in February of 2015 and Oliver Stone kept calling me Barry and Mr. President. For that reason, I’d been working on the voice for a couple years because I thought, ‘Maybe I’ll play him in 15 years.’” “Southside With You” marks Sawyers’ first lead following a slew of smaller roles in high-profile projects including “Zero Dark Thirty,” “Austenland,” and “Survivor.”

Meanwhile, the father of two has seven projects coming out this year including “Sand Castle” with Henry Cavill and Nicholas Hoult and, of course, “Snowden.”

With many a red carpet in his future, Sawyers is still navigating how to dress for the part of a leading man. “I love fashion, but I am 6’4″ with super long arms and legs, so I’m kind of limited,” he laughed, shaking his arm and leg to reveal that everything was a tad too short. “Once I can afford Armani or Acne Studios, I’ll be fine,” he said.

Sumpter said she hasn’t had the opportunity to meet the Obamas yet, but “they know about the story. Hopefully, they’ll enjoy it.”

Across town, actor-turned-director John Krasinski hit a pre-premiere party at the Acura Studio for his project “The Hollars,” a family drama starring Josh Groban, Margo Martindale, Sharlto Copley and Charlie Day. Anna Kendrick and Richard Jenkins also appear in the project — though they weren’t in town for the festival. “It’s a very honest take on what family is,” Krasinski said of the film, which follows a man who returns home after learning his mother is ill. “My daughter was born in February and we started pre-production in April so I arrived on set with a whole new understanding of life, in a way that I was so excited to explore. I was also probably very emotionally open and raw, so they got a whole bunch of different fire power.”

Having previously directed “Brief Interviews with Hideous Men” in 2009, Krasinski proved to be a pro behind the camera. “It’s nice to work with someone who really has a vision and he had a vision for this movie,” said Day.

So what did Krasinski’s wife Emily Blunt think of the film? “We always try not to be biased,” he said. “Our first comment every time is ‘Be honest,’ so when she said she liked it, I think I said ‘Be honest’ about 180 times. Three days later, she said, ‘No. I’m serious. I really liked the movie.’”

Sunday proved to be a big night for films and family, as was the case at the pre-party for Kevin Smith’s “Yoga Hosers,” which stars the writer-director’s 16-year-old daughter Harley Quinn Smith and Johnny Depp and Vanessa Paradis’ daughter Lily-Rose Melody Depp. The pair made their film debuts in his 2013 film “Tusk” and their characters inspired this spin-off, the second in a trilogy. Smith even left the casting to the two young stars. “I turned to them and was like, ‘Who do you guys like?’ and they were both watching ‘Carrie Diaries’ so they were like, ‘Austin Butler!’ and they loved ‘Teen Wolf’ so Tyler Posey was an easy reach.”

For his daughter, the experience was surreal. “If you asked me two years ago if I knew I’d be making a movie I’d be like, ‘What? Can I act?’ I had started playing the bass and wanted to be a professional [musician]. Now it’s definitely not the career choice I want. I love acting and I want to do it forever,” she said.

Also on Main Street, indie “godfather” James Schamus was celebrating the well-received premiere of his directorial debut “Indignation,” based on Philip Roth’s novel, at the Stella Artois space. The professor, producer, screenwriter and former Focus Features chief executive officer has been a presence at the festival for decades, but not in these shoes. “Unfortunately, I’m a boring interview because it was just fun and I loved it. Obviously I’m grateful. It’s hard to process at the moment. I’m staying away from my phone so all I get is everyone at the party coming up to me with their Twitter feeds and their texts showing me [the audience reactions].”

The film’s star, Logan Lerman, made an early exit because of a bad cold, but his costar Sarah Gadon sung his praises, saying, “I thought he did such an incredible job after the first time we rehearsed. I remember looking at James and saying, ‘Wow, he is [Roth’s protagonist] Marcus Messner.’ We go next to Berlin [Film Festival]. I feel like we are riding a positive wave.”