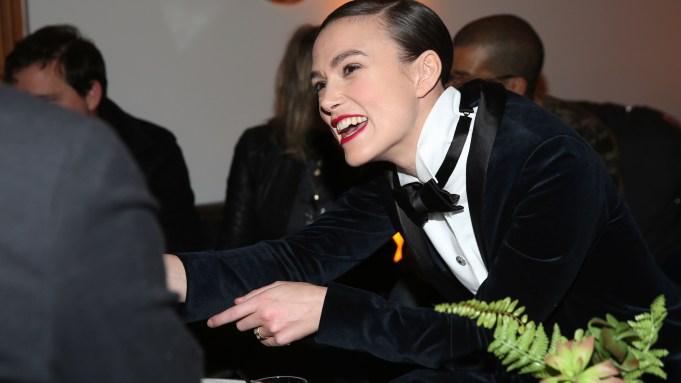 PARK CITY, Utah — Just a few weeks after a slew of A-list stars kicked off awards season with the launch of the Time’s Up anti-harassment campaign, movie stars including Keira Knightley and Idris Elba crowded into Park City, Utah, for the Sundance Film Festival 2018. Last year, the fest — held during President Trump’s inauguration weekend — took on a political tone. Thousands of attendees and a splashy array of celebrities — including Charlize Theron, Chelsea Handler and Kristen Stewart — slogged through the snow at the Women’s March on Main, in solidarity with Women’s Marches around the world.

One year later, the mood at the Respect Rally in North City Park was decidedly more subdued — and a lot less starry (but equally snowy), a stark contrast to the high energy at the sister march in L.A., where Natalie Portman and Scarlett Johansson helped draw a 500,000-strong crowd. In Park City, amidst the falling snow and freezing rain, Jane Fonda, Common and Gloria Allred invoked the #MeToo and #TimesUp movements, but roused a fraction of last year’s turnout.

An ebullient Fonda — introduced as “the un-introduce-able, the formidable, Jane f–king Fonda — cheered “Yay, Sundancers!” as she took to the stage. “We’re still marching, we’re still protesting, and now we also have to organize,” encouraged the longtime activist, adding “Time’s up!” “She’s awesome,” a fan gushed of the age-defying 80-year-old, in town to promote HBO’s “Jane Fonda in Five Acts” documentary.

Defiant “Thor” star Tessa Thompson ignited the crowd with this: “We’ve come here again to say, ‘Mr. Trump and all those like him, your time in power may not yet be up, but our time to stay silent is!’”

Allred then stepped up to the white tented podium, declaring: “This entire year has been the winter of our discontent!” Sending a message in her bright red puffy jacket, she continued, “It’s also been the year of our awakening and awake we are!” The subject of Netflix’s “Seeing Allred” documentary, premiering at the fest on today, added, “This is the year that women’s voices have been heard, the year when women broke our silences about the injustices we have suffered, and the year we said to rich powerful, famous men, ‘You can break our hearts, but you cannot break our spirits!’” With the huddled hundreds, she led several “RIPE” chants, shouting “Resist, Insist, Persist, Elect” and declared that the movement had “reached the tipping point.”

Common, who stars in Jennifer Fox’s thriller, “The Tale,” chimed in with a couple of verses of a song he recently penned, aptly entitled, “This Is the Day Women Took Over.” “Envisioning a world where women took over got me excited,” he said, much to the crowd’s glee. “We need you more than ever to make this world better.”

While the sobering undertones were felt throughout the weekend, casts still gathered to celebrate a host of well-received feature films, shorts and television series with a series of cocktail parties, dinners and late-night concerts.

The Fanning sisters were among the first to arrive, Dakota to promote her TNT series “The Alienist” on Friday and Elle to premiere the festival competition feature “I Think We’re Alone Now” on Sunday. Ethan Hawke and Rose Byrne starred in the Friday night crowd-pleaser “Juliet, Naked,” with Hawke pulling double duty as the director of “Blaze.”

Indie film staple Maggie Gyllenhaal garnered notices for her complex role as a teacher who becomes obsessed with one of her tiny charges in “The Kindergarten Teacher,” which also premiered on Friday night. “I found it very difficult to play her. I also found it very difficult to watch,” calling the premiere screening experience “really excruciating.” She explained, “It would break my heart when people would laugh. There was a guy in front of me who sort of guffawed in this vindictive way, and my heart broke, and then I thought, ‘You know what’s coming? The next scene is her weeping in the bathroom!’ I felt so proud of it all. I mean, what else could you ask for really?”

In a natural next step, she wants to direct. “I’m working on adapting a screenplay,” she said, adding that playing sex worker Candy in “The Deuce” served as an inspiration to go for it. “I kind of went, ‘Why aren’t I doing this?’”

Also enjoying the spoils of Sundance success: her brother Jake Gyllenhaal, who starred in the buzzy film, “Wildlife” with Carey Mulligan. On Saturday afternoon, Maggie showed up to support her younger sibling at the premiere of the drama, which was directed by Paul Dano and written by Dano and his longtime girlfriend, Zoe Kazan.

“It was actually fairly easy compared to acting together because we were never doing it at the exact same time — he would write parts and I would write parts — and also because Paul really had a vision as a director from the very beginning and I felt in service of that vision from the start. You know, I was trying to write the thing that he wanted as a movie, so in some ways he was my boss. There was no strange power dynamic because I knew what I was in service of,” Kazan said.

Hours later, Jake Gyllenhaal made another appearance to support his sister as she hosted an event at Hotel Park City to support Autograph Collection Hotels’ Indie Film Project, for which she is an adviser.

Clad in a pink Vampire’s Wife dress, Maggie Gyllenhaal took the stage with Martha Wainwright to perform a song for the small crowd. “I need one more drink of tequila,” she said after admitting, “My brother and I sometimes try to figure out the harmonies that [Martha] and her brother [Rufus Wainwright] sing on some of her albums.” With sheet music in hand, the duo broke into a rendition of The Magnetic Fields’ “Papa Was a Rodeo.”

The sibling theme continued as Immy Waterhouse tagged along to the concert with older sister Suki. In between bites of smoked salmon, the elder Waterhouse fretted about getting her little sister into the Sunday premiere of her social satire, “Assassination Nation.” “It’s so hard to get tickets!” she lamented. She did score two tickets to the Fonda documentary. “Unbelievable! I sobbed. I snotted all over my Burberry coat!” she said, noting that she preferred to look “like I’m trotting around London” instead of skiing.

Also in attendance: Ashley Judd, who greeted the Gyllenhaals before heading to the “Colette” after party at Café Artois. There, a tuxedo-clad Knightley animatedly chatted with costar Dominic West, director Wash Westmoreland and their posse behind a well-guarded red velvet rope. The had reason to celebrate; the film about the French writer was the first big sale of the festival, a mid-seven-figure price tag paid by Bleecker Street and 30West for U.S. rights.

The loudest party of the evening didn’t even begin until midnight, when Elba showed up at the Grey Goose Lounge with the cast of his directorial debut “Yardie” after its premiere. There, the actor went back to his DJ roots and took over the turntables well into the wee hours.