The annual film fest saw a host of celebs and hangers on descend on Park City over the weekend.

By Marcy Medina and Rachel Brown on January 23, 2013
View Slideshow 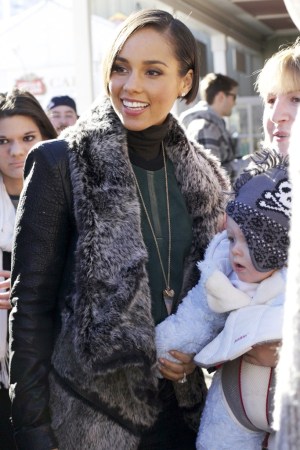 Throughout the days, Main Street was filled with stars (Alicia Keys, Naomi Watts), wannabes (Paris Hilton) and looky-loo’s promoting films, learning to snowboard courtesy of Burton pros and gathering swag. Amid the hubbub, actors enjoyed the camaraderie of the casual but tight-knit scene. “It’s…overwhelming. I really need a break but I love all the excitement,” said Brit Marling, last year’s breakout “It” girl, who returned this year with thriller “The East.”

“Ahg, I’m so over it,” quipped Jones of starring in her second Doremus film. “I’m sure we’ll re-muse in about eight years.”

Also on Sunday night, Asos threw a party at the restaurant Wahso for one of the most anticipated movies at the festival, “Ain’t Them Bodies Saints,” a tale of Texas outlaws with Casey Affleck, Ben Foster and Rooney Mara, trying to break out of “The Girl with the Dragon Tattoo” mold. While the introverted Mara declined interviews and sat demurely nibbling on Asian fusion fare, Affleck praised director David Lowery. “Thank you David for an amazing movie,” he said during a brief speech.

In typical Sundance fashion, celebrities attending the night’s various other parties, including Mia Wasikowska and Michael C. Hall, dropped by to offer their congratulations. The well-wishing and partying were simply a backdrop for the real business at hand, as Affleck underscored with a question to Cassian Elwes, a producer on the film. “You haven’t sold it yet?” he inquired hopefully. The answer, for the moment, was no.

The next day, the legendary backup singers featured in the documentary “Twenty Feet From Stardom” gave an impromptu performance at Italian eatery Cisero’s during a lunch celebrating its acquisition by Radius-The Weinstein Co. for North American rights and Wild Bunch for worldwide rights. Merry Clayton, who sang the line “It’s just a shot away” for The Rolling Stones’ “Gimme Shelter,” was in attendance. “Right now, I’m having a ball. Next week, I go back to being a grandma diva,” she said.