Super Saturday Brings Out the Bargain Savvy in Watermill 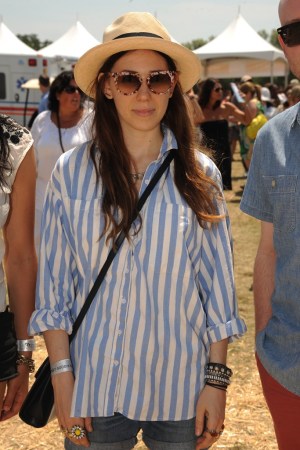 “Here we go,” one woman murmured to her friend, taking a dramatically deep breath on Saturday while approaching the entrance to the 16th annual daylong designer tag sale known as Super Saturday at Nova’s Ark Project in Water Mill, N.Y. The bargain-hunting skirmish was in full swing underneath the three towering white tents set up with shoppers clumping up around the rows of designer stalls.

The Kelly Ripa, Donna Karan and InStyle magazine cohosted event, designed by Mark Addison and sponsored by QVC, drew do-gooders Kelly Rutherford, Ali Wentworth, Nicky and Kathy Hilton, and Fern Mallis. Karan had in tow her expanding brood of grandchildren, who she obliged with a trip down the Super Slide, a hot pink undulating hill planted between a Ferris wheel and an arcade hub (there were plenty of kiddie activities — a bubble machine, a face-painting station, etc. — to ensure a safe berth from the bargain-hunting bedlam).

This story first appeared in the July 30, 2013 issue of WWD. Subscribe Today.

“There was nothing fun about that,” Karan said of her ride. “My grandkids were going down like it was nothing. I was screaming, scared to death. But at least I got Cool Grandma points.”

Karan also scored points with the Ovarian Cancer Research Fund, which raised $3.5 million through the event.

“You know what’s really beautiful about this?” she said, looking over the fracas in all its spending splendor. “Is that this is everything I’m about: philanthropy and commerce. You know, dressing and addressing the issues at hand — conscious consumerism.”

Karan conceded that the free-for-all yard sale does tend to induce some bargain-frothing.

“It’s funny — when I first walked in, I see, of course, a girl with her pants down,” the designer laughed. “It’s just this enormous storm of people who are obsessed with getting a deal.”

The jostling mob was toiling away by the booths, rummaging around and liberally giving one another the stink eye.

“Actually, that’s mine,” one women barked, yanking a rumpled ball of organza off the Alice & Olivia table after noticing a fellow shopper’s hand hovering over it.

“Um, OK then,” the other snarled with an eye roll. A few stalls down, at the Schutz table, tunnel-visioned shoppers flung around espadrilles, loafers and spiky pumps, combing through the offerings with a near-rabid intensity. Further down, there was a veritable tug-of-war going on at the Robert Rodriguez table over a pair of stovepipes. At the Diane von Furstenberg booth, shoppers jerked hangers through the cluttered racks, culling anything that looked even remotely appealing for fear someone else would make off with their finds.

“I’m just going to get naked,” one woman proclaimed before stripping off her tank to try on a jacquard T at the Cut25 by Yigal Azrouël booth.

By the end of the six-hour-long shopping souk, most booths were slashing prices to near-giveaways to drain inventory. As shopping fatigue began to set in, many attendees were seen sitting on the ground among mountains of bags, catching their breath and cooling off with coconut water (Zico, a purveyor of the trendy hangover remedy, had a stand). Sources later confirmed that 7,400 merch-filled shopping bags were carted away.

Shoppers were handed a hefty canvas tote goodie bag on their way out. “I don’t know if I can take this,” one bargain hunter said of the cumbersome tote, almost toppling over. She already had her hands full with at least seven shopping bags: “This is not going to all fit in the Mercedes.”