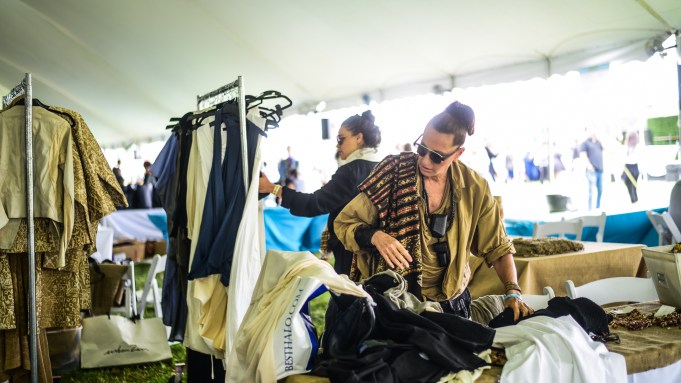 “It all started in Liz Tilberis‘ backyard. We all emptied our closets,” Donna Karan recalled as she arrived at the annual philanthropic shopping extravaganza Super Saturday, benefiting Ovarian Cancer.

Karan backtracked — Super Saturday started even before that.

“The concept started with 7th on Sale,” she clarified. “I said, ‘Let’s bring conscious consumerism to let people talk about AIDS. So it was the CFDA, Anna [Wintour] and my myself, and Calvin [Klein] and Ralph [Lauren], and it was really quite wonderful,” she continued. “And so we tried to duplicate it out here in Liz’s backyard. We started really small, and it blew up,” Karan said,gesturing towards the sprawling event in the field at Novas Ark Project in Water Mill, N.Y. “It really did, which is fantastic.”

Karan headed into the throng toward the Urban Zen booth, browsing through the racks as her daughter Gabby Karan de Felice stopped by to borrow a jacket. (Normally blistering hot, the fall-like weather of this year’s sale made the deals on warmer ware more appealing than usual.)

“Twenty years I’ve been involved in this,” declared sale cohost Molly Sims. “Well, almost 18 of them. I’ve been coming that long, when Donna started it in honor of Liz Tilberis,” she continued, making her way through the crowds. “It brings me back to all of my modeling years and coming out here.” Any shopping advice from a seasoned Super Saturday pro? “You enter knowing where you want to go before. You do not just enter blind,” said Sims.

“We get a lot of Brooks Brothers here for all the guys in my family,” said Rachel Zoe, reflecting on her past Super Saturday finds as her father gave a wave from nearby. “We always do a Ralph Lauren stop, kids clothes — I buy my kids a ton of fun things,” she added. “They’re probably on the rides or wherever they are. I haven’t seen them since I walked in.”

In celebration of 20 years, Karan hopes to riff off the Super Saturday concept during New York Fashion Week by hosting a luxury charity shopping event at Urban Zen. While the higher-end options on Saturday were quickly picked over — Edie Parker’s selection was sold out an hour into the sale — there was still plenty for shoppers to sift through.

“I’ve been coming since the beginning. Donna got it to this scale; she’s done an amazing job with this [event],” said Fern Mallis, who has also witnessed the event evolve and morph in other ways. “So many companies became public, they don’t have the amount of merchandise that they can just give away anymore. Designers and products here have changed through the years,” she said. “It’s still an amazing community event, and it raises a lot of money — and that’s what matters.”