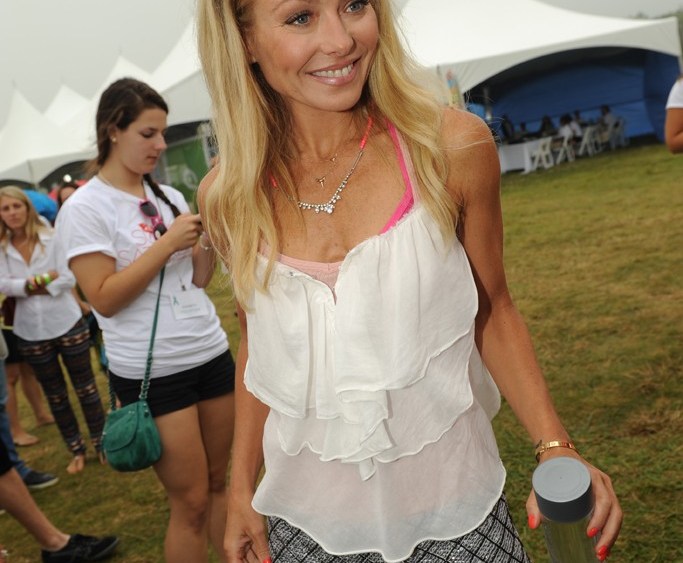 The 15th annual Super Saturday in Water Mill, N.Y. — co-hosted by Kelly Ripa, Paula Patton, Donna Karan and Ariel Foxman — hit the skids for a few hours when VIP arrivals were asked to return to their cars and wait out a sudden deluge. Hay had been thrown down over horse manure in the makeshift parking lots at Nova’s Ark project, providing plenty of joke material for downpour-delayed partygoers.

Proceeds from the event go toward the Ovarian Cancer Research Fund, and most of the property had been tented with a high, peaked marquee under which brands such as Diane von Furstenberg, Ralph Lauren, Robert Rodriguez, Theyskens’ Theory and J Brand had booths set up with discounted wares. The entrance was more vulnerable to inclement weather. The step-and-repeat rattled and shook with the rain for a good portion of what was meant to be the VIP shopping hour. Signs posted throughout the grounds read that New York State Law required the tents to be evacuated if wind gusts exceeded 35 miles an hour.

“Tents are not safe during extreme weather,” one volunteer said, “so let’s hope the only thing that gets ‘extreme’ is the shopping.”

Well, they did their best.

Arrivals like Beth Ostrosky Stern and Tiffani Amber Thiessen, who had her daughter Harper in tow, began entering the party as the rainfall changed into a lighter drizzle and eventually subsided. They were followed by Veronica Webb, Matthew Settle, Shoshanna Lonstein and Jessica Hart, who wore a large straw hat to combat the humidity. Nanette Lepore surveyed the wares at her booth, and noted the silver lining over the event.

“Happy to be a part of the cause,” Lepore smiled. “The tent actually adds something —at least this year people won’t get sunburned.”

Hilary Rhoda was somewhat fearless in a filmy sleeveless blouse and white pants.

“I’m not worried about a little rain,” Rhoda said. To be sure, should something have happened, she could certainly have patched together an outfit from the vendors. A small queue was forming at the northwest corner of the enormous marquee, where shoppers waited under a sign that advertised “psychic readings with Betsy Wahmann.” Nearby, a tent for children emblazoned “Camp Divalysscious” held a gently rapping performer, who offered distraction for kids waiting out their bargain-hungry parents. Next door was a portable video arcade, for disinterested shopping companions of all ages, and, catty-corner to that, Paula Patton wielded a blush brush at the Cover Girl booth.

InStyle was a sponsor of the event, along with Karan and QVC, and had a cabana lined up next to Fresh’s beauty truck and a Dove hairstyling booth.

“It’s important to remember the cause,” Ripa noted. “Our goal is to put this event out of business; to cure ovarian cancer.”

Super Saturday was started in 1998 by Karan and the late Liz Tilberis, who died from ovarian cancer in 1999.

“This started as a tag sale in Liz’s backyard,” Ripa said. “And now look at it.”

She was decidedly empty-handed, considering the VIP shopping hour had ended and regular ticket buyers were descending on wares.

“I always end up with the stuff covered in makeup stains,” Ripa added. “I don’t mind, though. I get paralyzed by choice.”